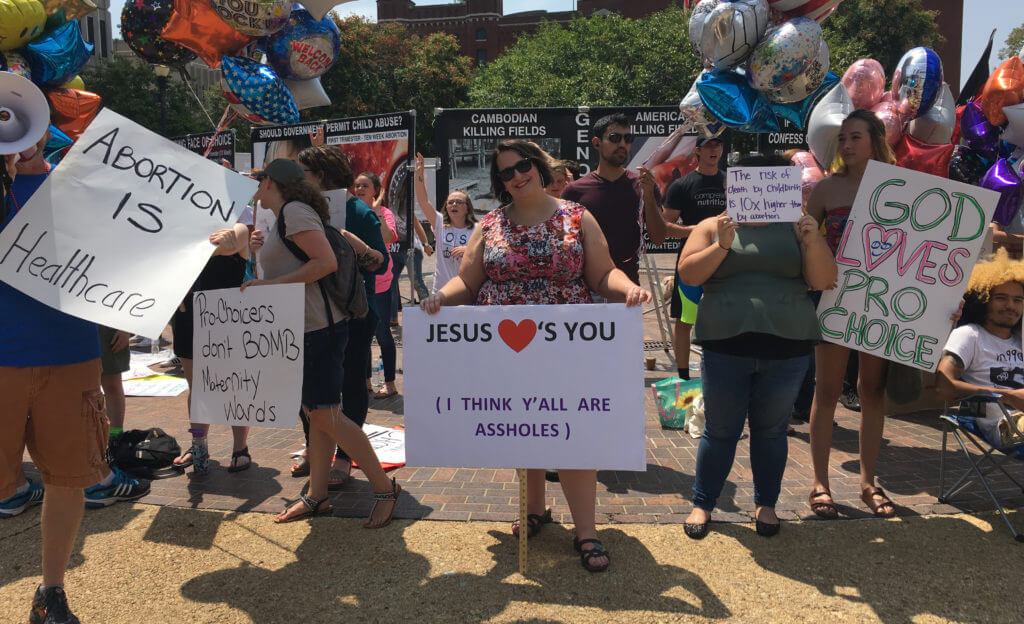 “You got video on that thing?” a middle-aged man in a gray T-shirt asked assertively, as he approached me between a bouquet of party balloons blocking the street view of large sign comparing abortion to Pearl Harbor.

“I wanted to make sure I tell you about the death, burial and resurrection of Jesus Christ for your salvation — so you’re without excuse! We came and did our job, we told you about Him, and those who believe in Him shall not perish but have everlasting life.” Then he checked his watch, adding, “I want you to know I care about your future and your soul. I want to let you know that today at 1:40 p.m. on July 26.”

Cool. It was thrilling afternoon downtown, thanks to our guests. Operation Save America, the North Carolina-based group has been in Louisville all week to protest abortion, and on Wednesday, its sensational antics were met by counter-protesters.

I found out about Jesus Christ. And I almost got into a fight.

Like other blue islands in red seas peppered across our increasingly cleaving country, life in Louisville is a precarious thing. This district has reelected one of the more progressive voices in Congress, John Yarmuth (LEO’s founder), repeatedly for over a decade. A giant rainbow flag mural scrawled with the word “LOVE” recently popped up a couple blocks down from my Butchertown apartment. Mayor Greg Fischer uses common sense business acumen to push environmentally-friendly legislation popular with the left. And yet, the NRA held its annual meeting here. Donald Trump held a post-election rally in town earlier this year, an event apropos of nothing. And now we have Operation Save America, a group that has recently declared Kentucky “ground zero” for its ongoing war on abortion.

Louisville now has the state’s lone women’s health clinic performing abortions, so bringing that battle here makes sense for its agenda. Having a hand in helping usher in the first state free of abortion procedures would be a major win for the conservative Christian group. After losing a fight with the city to abolish the buffer zone in front of Market Street’s EMW Women’s Surgical Center, the show must go on.

So, on Wednesday afternoon a parallel pro-life group, the Columbus, Ohio-based Created Equal, teamed up with OSA to erect a 16-foot by 8-foot TV in front of Metro Hall at Jefferson and Sixth streets, broadcasting grisly images of bloody fingers and toes and interrupting the peaceful walk of the pleated-khaki army heading from its government and bank jobs to grab something to eat during lunch. This was paired with a truck and trailer roving the streets, embedded with an LED screen displaying “Abortion Kills Children” messages.

Compared to the massive neoclassical facade, the TV screen wasn’t terribly impressive in size, but the images were still plenty visible across the street at Jefferson Square, where a large array of counter-protesters made their presence known — an action organized by the Facebook group “Ask Bevin About My Vag,” whose roots sprung from the online trolling of our chucklehead governor in response to the bill requiring doctors to perform an ultrasound and describe the image to women seeking an abortion. At the midday peak, by my estimate, around 75 to 100 people showed up with balloons, boomboxes, hand-drawn signs and even a mascot — a towering owl that would make Squallis Puppeteers proud. “I’m Owl-bortion,” the owl said to me, about his costume. Visually, the counter-protesters presence dwarfed the pro-life activists by a noteworthy margin, and was decidedly less solemn compared to the hymn singing and finger wagging. Owl-bortion stood adjacent to my friend in the gray shirt from earlier, pontificating behind a megaphone, shouting “I don’t give a hoot, Chad!” I didn’t ask the man behind Owl-bortion any questions about himself, because sometimes it’s better when the origin story remains a mystery.

Punks and goths were there. Trans folks were there. People draped in Gilead’s trademark red dress and bonnets a la “The Handmaid’s Tale” were there. Brass players were there, making some noise. The local chapter of The Satanic Temple was there (and as Detryck from the group told me, they identify more agnostic/atheist, leveraging the Satan angle to test how strongly people actually value religious freedom). My accountant was there.

And people who work downtown were there, taking their lunch break to the streets. “I came to make sure Operation Save America knows they’re not welcome here in Louisville,” said downtown worker Brian Manley. “They’re known as a pretty extremist religious group who has at times supported violence, so I’m worried about that.”

For others at Jefferson Square, they came for more personal reasons. “It’s extremely upsetting to me as someone who had a miscarriage at 12 weeks to see these images, images I already can’t get away from,” said Kelly Meurer. “And I work downtown, so I can’t leave, I can’t avoid it, and it brings up trauma for me. I decided to come down and stand in front of the [anti-abortion] posters so others don’t have to see this.”

And for others, it was both professional and personal. “I work for a reproductive justice organization, so this is where my commitment lies, to preserving bodily autonomy,” said one demonstrator who asked not to be named. Their poster read “Sex is beautiful, reproduction is optional.” “I’m also a trans person who has had an abortion, so I have a vested in that right for people after me. Everyone should have control over their bodies and their minds.”

Our talk got cut short when a man in his 50s took a swipe at one of the signs. He came from a group separate of the Created Equal faction vis-a-vis their differing uniforms — black T-shirts with Created Equal’s logo, versus, what he was wearing, a red and gray “Truth Sounds Like Hate” shirts that look like knockoff Big Dogs gear, topped with an embroidered cross ballcap.

Things got heated quickly. The man mentioned something about “being friends with the of chief police,”  at which point I couldn’t help but inject myself into story (my journalism professors would not be happy). “Well, my dad’s a cop, too, so what’s your point?” which led immediately to a grubby, banana-shaped finger in my face. “Are you a queer? You like having sex with men?” he shouted at me, as if that was some sort of insult, and we’re in fucking middle school. “No, but if I did, so what?” He proceeded to make derogatory remarks not fit for print and showcase pretty aggressive body language, before I mentioned I had about seven inches of height and some discernible physical activity on him and he better give some space.

This is the closest I have come in my adult life ready to lay someone out flat. I haven’t been in an altercation since a third grade playground incident. So to you — congrats I suppose? You got a rise out of a generally calm person, which is probably what my buddy, who definitely has a decal on his truck of Calvin peeing on something, wanted. (A request for any reported incidents of violence at the protests to Louisville police was not immediately returned, but I didn’t witness anything over the course of approximately two hours, other than my buddy’s chest-puffing.)

I met James Silberman from Created Equal, adorned in the aforementioned black T-shirt. He comes from Washington state, is college-aged, and whether it’s just youth, or perhaps his general demeanor, appeared to be the calmest person of the pro-life faction I spent time with. Relating the story of the miscarriage from the woman I spoke with earlier, he defended his group’s use of the giant TV’s ghastly images. “We were in Las Vegas at an event, and this woman makes a beeline for me. She started telling me this story: when she was 18 or 19 and how she got pregnant and was going to have an abortion. There were people out there holding signs with pictures of aborted children,” he said, almost mirroring the first 20 minutes of “Juno.” “When she saw those images, [and] that the people at Planned Parenthood lied to her — that it’s a clump of cells, scrambled eggs, whatever words they use — she kept her child, who’s now 33, and she said was the best thing that ever happened to her.” He related other stories, too, and compared the group’s tactics to the distribution of the gruesome Emmett Till photo that helped spark the Civil Rights Movement. The difference, of course, is that the Till photo was unequivocal and easy to source. Anti-abortion imagery is not. Some are stillborns or miscarriages, while others distort the reality of abortion, as some 90 percent of terminated pregnancies happen during the first trimester and bear no resemblance to these images, National Abortion Federation president Vicki Saporta told The New York Times.

“I would make [these] people very uncomfortable to save lives,” James said, employing the classic strategy of extreme measures to force the will of the moderate. I asked him how he feels about OSA’s dangerous use of distributing literature publishing the names and addresses of employees at the EMW clinic. “Maybe not the addresses, but the zip codes at least,” he said. “People in those neighborhoods deserve to know what that they’re neighbors are doing this.” Even at the risk of violence?” “[Clinic bombings] mostly happened in the ‘90s,” omitting acts such as Robert Dear’s 2015 rampage in Colorado that left three dead and nine wounded.

People not part of the counter-protest confronted the anti-choice group as well. An older gentleman, with wispy white hair, a Quizno’s bag in hand and a keycard dangling from his belt, talked about his daughter: “So, if my daughter was raped, what then?” to which the guy in the gray shirt repeatedly exclaimed that as the cop out argument. “You think it’s a cop out, that’s fine, you don’t have to tell me five times. But, you don’t talk about life after birth, about adoption choices,” the man said.

I didn’t get a chance to see if the man trying to eat his sandwich met the infantry.

Before the afternoon of antics winded down, a small group of children and teens were parading around, singing praise songs to beef up the numbers — and for tactical purposes, given it’s unlikely the opposition would yell at children. Which is true, but it doesn’t endear anyone to this group or its message. I was Republican at 13 too, man. The group, for a brief moment, was able to overpower the more joyous chanting and errant trumpet riffs of Ask Bevin About My Vag’s action via a portable Fender PA (someone should alert them Fender is a godless business), to decry the group’s “filthy music” (they were playing Beyonce) and not “confronting truth.” So, the usual old hat. While they had a permit until 4 p.m., OSA and Created Equal packed up their displays and tables of doll parts shortly after 2 p.m.

It was a hot one after all. Not as hot as hell, of course.