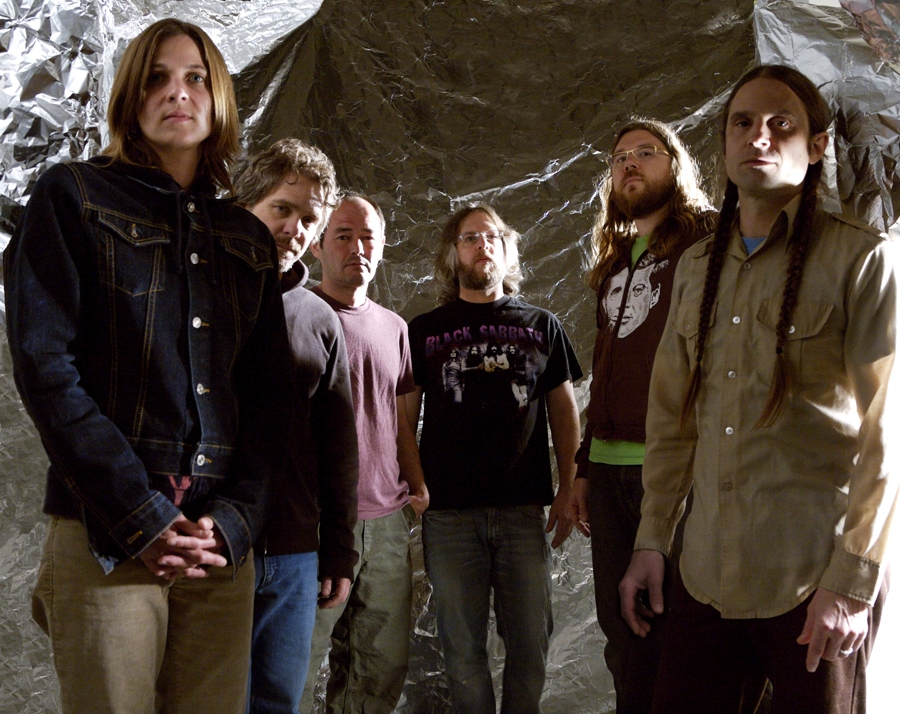 Bardo Pond makes it immediately clear – they are an uncompromising act. For over two decades, the Philadelphia collective has never succumb to trends or altered their sound to fit the times. Sure, some songs might imbue more free jazz structures or Baroque pop flavors. You may even encounter a fanciful, galactic Beatles cover. By and large, however, Bardo Pond exists as a constant — your best source for steady cosmic riffage, cavernous flute meditations via the free-spirited Isobel Sollenberger, and guitars caked so thick in the primordial ooze, they’re practically impenetrable to light.

Michael Gibbons is half responsible for Bardo Pond’s monolithic guitar machine (his brother John completes the team), and he was nice enough to chat with me over the phone about not reading too much into titles and making music for no one but yourself. The idea for a Bardo Pond and Mogwai collaboration may have also taken root in our conversation, fingers crossed.

AZ: Bardo Pond has been around for about 20 years now, sticking closely to your trademark sound. How do you keep the same vigor when you’re writing and playing after all this time?

MG: It’s always given us the same buzz. It’s still a lot of fun, we still dig doing it, and we’re pretty honed in on exactly what we’re trying to do now. I don’t know how else to describe it, really. Also, we’ve had support from people who tell us to keep going.

AZ: By ‘honed in’, do you mean you’re more efficient with songwriting or that you’ve discovered what clicks?

MG: A combination of both. We can get together and write a song, and we know when one’s good and when one’s not. We really know how to push our sound and we love doing it. We are more adept at getting to new places, and there’s still a lot of exploration in what we do. But now, we know our sweet spots and how to hit them.

AZ: Do you foresee Bardo Pond as a legacy type of indie rock band? That is, do you see yourself continuing on 10, 15 more years?

MG: Knock on wood, why not? It’s been a helluva long time now. I was just talking to someone about it, and every time I just wind up shaking my head. How did so much time go by? We love playing, and I can’t imagine what else we’d be doing. We’re all here in the same neighborhood, and as long as people want to hear it, we’ll be doing it. Probably even if no one wanted to hear it.

AZ: Especially in the past decade it seems like Bardo pond boasts a large catalogue of EPs, like the Volume series. Are shorter records your preferred method of releasing music?

MG: I think we put out songs when it makes sense. We do a lot things outside of Bardo Pond [that end up as] more material from Bardo Pond or collaborations. We record everything we do. And as far as full-length albums, I wouldn’t like there to be such a gap between the next Bardo record and the last one. We’re gonna try to release something within a year.

AZ: Why the long gap between your last album, 2006’s Ticket Crystals, and this year’s self-titled?

MG: Time is strange. It just didn’t seem it’s been that long, you know – four years. It’s hard to explain. We were in between labels, and personal things, and other vague stuff that was going on that prevented us from killin’ another record sooner. I think it was only about two and a half years between Ticket Crystals and On The Ellipse, which is about how long it takes to get our material together and get it out. I’d like to cut it down a lot with this one, and we’re getting some ideas together now. In the meantime, there’ll probably be another self-released Volume 8. I really want to get that out on a vinyl record. [With s/t]there was some straight up improvised songs and stuff that we really worked hard in the studio to keep focused. The next record will probably be like that too.

AZ: Why did you decide to go with an eponymous title? Is this record a sort of definitive statement?

MG: I think we felt it was at this time in our career. With all the other records, the titles came pretty easily, but not with this one. We thought so ridiculously hard on it, kinda like the name of the band. [Bardo Pond] was one of the first names that Clint [Takeda] came up with and we all felt that it was a great, but we still spent months agonizing over it. Finally, somebody just said ‘what are you talking about, that’s the name of your band.’  It took somebody outside of us. The record was similar. We never had anybody say ‘that’s the title of the record’.  So it ended up being Bardo Pond. We couldn’t come up with a title that fit the album or where we were at, and we also appreciated the irony of being this late in our career and naming our album after ourselves. It’s been so long since the last one came out that it almost was a debut record in a way [laughs].

AZ: On the subject of titles, the new album doesn’t have any of the infamous Bardo Pond drug references sprinkled throughout. You all on the straight and narrow now?

MG: [laughs] That’s funny… no, we are definitely not on the straight and narrow.

AZ: Before I forget, Stuart from Mogwai wanted me to ask this over Twitter. What do you know about ‘who repiss’?

MG: [laughs] We were touring Europe with Mogwai, and in Glasgow I think, there was graffiti all over the [venue’s] green room. I think the graffiti was a band, or maybe someone’s tag. But John saw it, and was like “who repiss?” Barry [Burns] and Stuart [Braithwaite] just started cracking up, and I wandered over wondering what was so funny. John pointed at the wall and said “who repiss?!” And I guess the proper pronunciation is “Whore Piss!” So that’s a long running joke.

AZ: That… rules [laughs]. Speaking of Mogwai, since you all have played together so much, has there been any discussion of a collaboration?

MG: No, and I don’t know why actually. I’m gonna get on the horn with Stuart because that’s a great idea. The only thing we did was a Matador-released split 10″ for the tour, but one side was them and one side us. On stage, we play together a bit. I’ve played bass for them, and Stuart would play “Tommy Gun Angel” with us. I mean, they’re in Scotland and we’re here in Philly, but still.

AZ: Invite them over during ATP!

MG: Oh that’s right! That’s a great idea. I wanna get on that bill! We haven’t been able to whore ourselves out enough to get on that! I’m just gonna go and stay with Mogwai.

The music world is so vastly different, even since Ticket Crystals. Where does Bardo Pond fit in the current conversation?

MG: We’re like Spacemen 3, ya know… taking drugs to make music to take drugs to. How we fit in is how we’ve always fit in. We do what we do. If anyone wants us to fit in, that’s fine, if they don’t, that’s fine too. It’s outside any concern. We’re not doing anything for anyone but ourselves, and whoever accepts it, accepts it.

Bardo Pond performs with Thurston Moore and White Out on June 18 at New York City’s Le Poisson Rouge. Their latest, Bardo Pond, it out now on Fire Records.