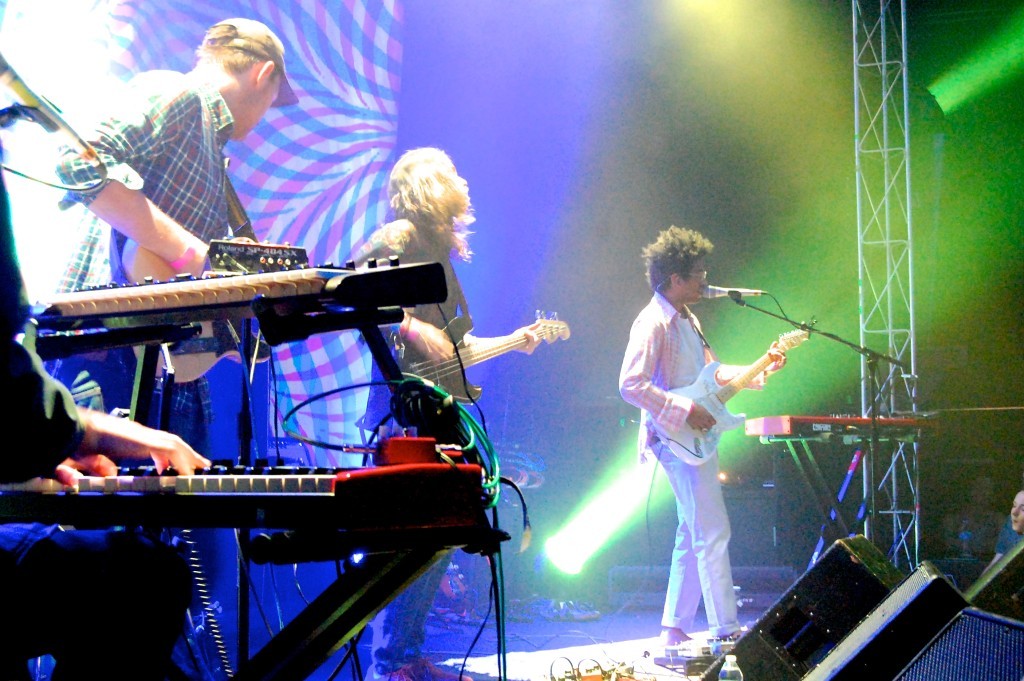 Like the unencumbered plume of crude oil from the Deepwater Horizon scene or the shouts of conniption-afflicted patriots in town hall meetings (remember those?) across this great land, the sounds of chillwave also billowed through the cultural zeitgeist in the great summer of 2010 and out of every Urban Outfitters and MP3 blog (remember those?).

Like punk and shoegaze, chillwave’s title came about as a joke — generally attributed to the hyper-ironic satire blog Hipster Runoff (RIP). As woozy, bedroom-pop trends slowly died off, the genre’s two biggest stars, Washed Out and Toro y Moi, cashed in their stocks and reinvented their business. Washed Out built out a full band and a better version of his relaxed summer anthems, and while Toro y Moi also came out of hiding behind his laptop and synths with a fully-functioning band while taking a drastic turn, his latest, “What For,” is Chaz Bundick’s outright embrace of rock music, saturated with his trademark wobbly funk.

And, of course, Chaz and Company kicked off the evening wheels up with album openers “What You Want” and “Buffalo” Saturday night at Headliners. He also came with a bigger boat since the last stop in town during *Forecastle 2013, boasting a mean five-piece. (*I picked that set as a top ten moment that year for Consequence of Sound because the good vibrations of “Anything in Return” offered the absolutely perfect complement to “the background of brilliant blue clouds contrasting the oppressive heat and thousands of sweaty kids” over Waterfront Park’s Great Lawn.)

In a smaller club setting, a bit of the magic was lost, despite the beautiful stage backdrop that celebrates CMYK color processing. The fuller instrumentation and super tight band sounded flawless over Headliners’ crisp PA though, and kept roughly 400 or so people — squarely in the 18-to-24-year-old demographic — bobbing their heads. But much of the punchy energy Toro y Moi bottles and releases for festival performances at Forecastle and Pitchfork went MIA.

Perhaps it was his opener’s fault. LA’s Vinyl Williams is an under-celebrated treasure. Donning a tunic and hiding his face behind tufts of coarse hair à la Michael Stipe circa 1981, el jefe Lionel Williams gallivanted about the stage like a medicine man, holding his axe over the crowd and serving up high volume science by the spoonful. He and the band brought forth a muscular brand of true blue shoegaze and psychedelia straight from the catacombs that you could actually dance to — think of the last two minutes of Ride’s “Leave Them All Behind,” but with a more pronounced groove. This is a man who studied the elder scrolls of Kevin Shields, Chapterhouse and House of Love, yet figured out a way to make his wall of sound both formidable and fluid. My hair was so blown back, by way of both performance and decibel level, that I didn’t even care about the drummer’s dreads. You do you, man.

Like Toro y Moi, Vinyl Williams started in the bedroom and built a band, retrofitting the sounds for a full stage show. Unlike Toro y Moi, they’re not afraid of volume or going full celestial. Toro y Moi kept the space funk grounded and the audience bobbing. Vinyl Williams put them under hypnosis — a real treat for the early birds.