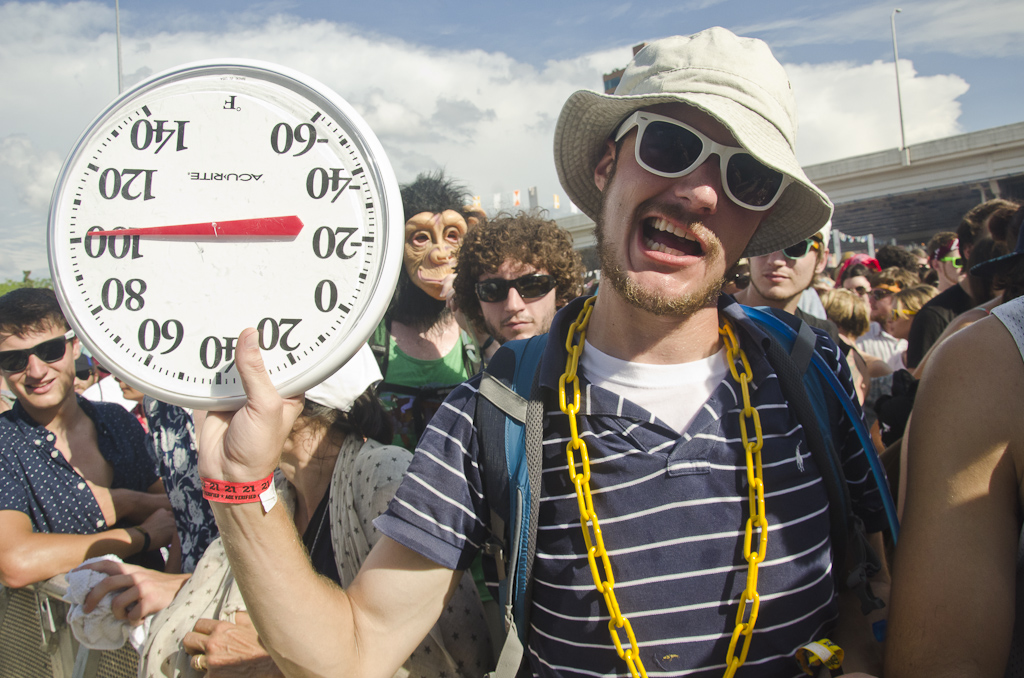 Forecastle 2015 kicked off early on Friday, before office minions (not the yellow kind) expunge themselves from their cubicles, with a steady and restrained force. Milo Green drenched the main Mast Stage in a reverberated electric folk/pop to welcome festival goers. Rather than nosh down on grub or dip into the stages’ photo pits from the get-go, I wanted to explore the peripheral “festival experience” tents. You know, those branded booths offering free or specially priced goods, or better yet, a fully branded experience that you might tell your friends about, in essence organically propagating a brand message. Engaging with the brand. Marketing is so dope, you guys.

Some nailed it. Tito’s Vodka offered a grab bag of sunglasses, bandanas, and other summer appropriate gear. Hell yeah, I want this stuff, and also I’m a walking advert for Tito’s. You could do worse. While wanting to really dig into the branded festival vendors, yours truly grabbed a golden ticket and hopped aboard the most magical tour in the land – the Camel Tour. I asked the blue-haired attendant, probably in her mid-20s, what wonders lied ahead. She told me she’d never reveal, it must be experienced. Like The Wall. OK, heave ho… I saunter through the threshold and immediately get requested to pull my licensed from my wallet to scan. “Why?” I asked, and the young man inside the house of mirrors asked with haste “do you smoke?” I said I didn’t, and was kicked out but a svelt young man with a Telxon. That’s cold, fam. For what it’s worth, in the brief time I was allowed to watch Oz work behind the curtain, there’s a photo booth and a giant camel statue you can draw on with Sharpie (trade mark). That’s the magical Camel Tour. More like smoke and mirrors. Fuck them.

I really wanted to check the HTC “virtual reality tour” tent. The volunteer told me it was one of the coolest experiences of she’s had, which is a ringing endorsement, no? And really that’s what festivals are, right? A series of experiences and brand engagements. But I wasn’t going to wait an hour (though she assured me it was worth it). I’m media… I have “shit” to #do. Really, I wanted to see if it resembled the 1992 psychological horror film The Lawnmower Man. It’s like Flowers for Algernon, but with computers.

Oh, but the good! First, JEFF the Brotherhood might be the most photographic band in the world because a) their songs stretch over six minutes (photogs are limited to the first three songs per festival protocol, no matter the length, so this is great), b) they strike amazing poses, c) they rule, and d) Jake Orrall’s translucent see-through Gibson SG. It’s some Guggenheim shit. And they tore up the Boom Stage in the most nasty, primordial manner possible with their sludge prog-punk. That they didn’t score Jurassic World is a travesty.

The move of Alvvays from sweltering afternoon to ambient dusk, due to Speedy Ortiz’s last minute cancellation, proved ever so serendipitous – their expansive power pop reminiscent of maestros Velocity Girl and Aislers Set glimmering over the cappy Ohio River at sunset was such the perfect ambience. Alvvays’s set was an unequivocal highlight. I loved them. They’re an amazing band that deserves all the rubies.

ZZ Ward was upsetting. Her aggressive form of, I think, trip-hop didn’t marry well with her screaming stage banter about how much “Louisville fuuuucking rooocks, motherfuuuucker!” Yawn. Big K.R.I.T. was also a massive snooze – 808 beats and chants of “fuck these haters and fuck these hoes.” Snooze. For magma-propulsive, visceral hip-hop, SoCal’s People Under the Stairs already drove that school bus home with a barn burnin’ afternoon set. And while the crowd was light, they were lit. If you missed it, you missed it.

As happens every now and again, Forecastle gets evacuated for stupid weather, and it seems a surprise derecho (I think that’s what it was) cut Friday short, disallowing fans to “stay” with Sam Smith. But also per usual, the under-appreciated staff jumped into action and made it the smoothest exit to Friday night possible.

Here’s my portrait from the super awesome Jeremy Sutton at the Heineken tent, who was also great… 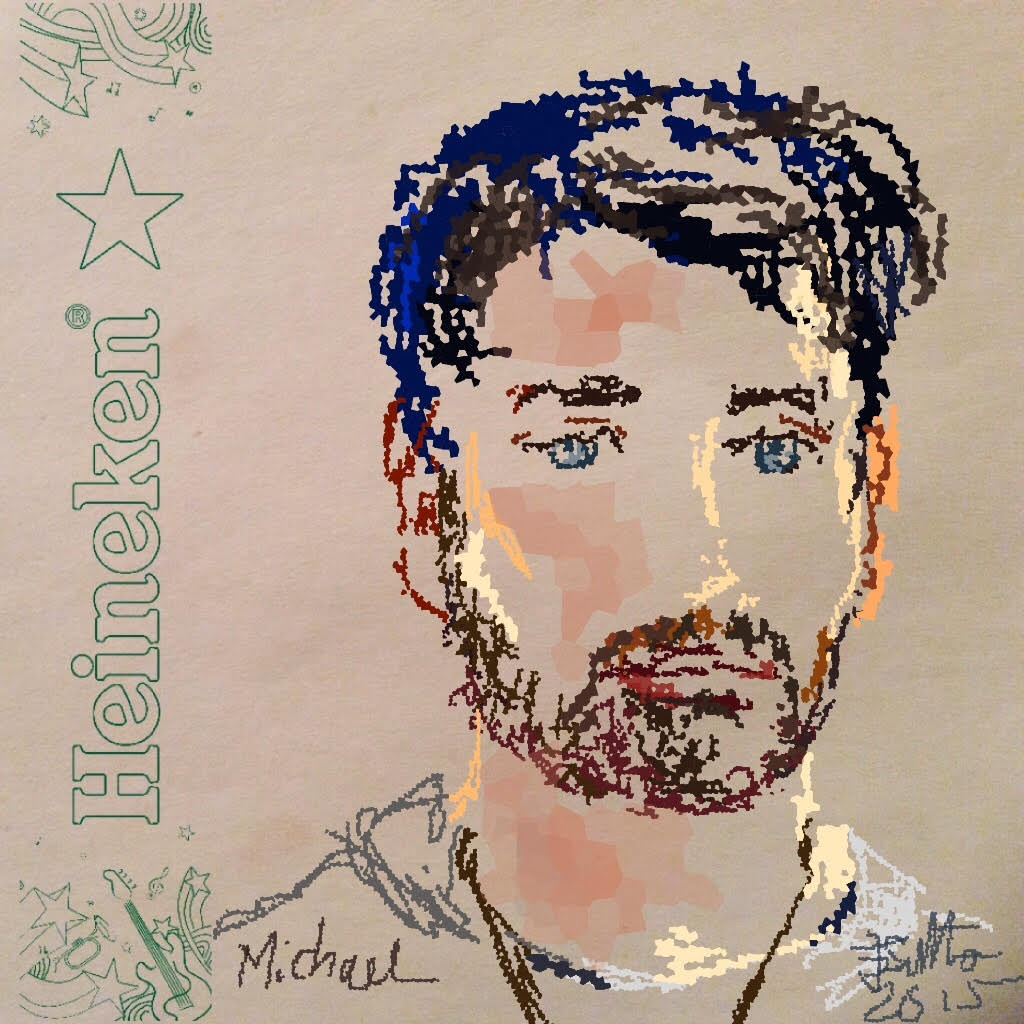 Yes, you get branded officially, but that’s the festival experience. So see him, he rules.

That feeling when you realize you might be old.

Music festivals are great at making you feel old even when you’re not, for so many reasons. Watching really young kids go apeshit for some EDM dude who sounds like Prince after getting hit by a TARC bus you’ve never heard of is one of them (his name may or may not rhyme with Terub). The other is the physiological effects. The heat, the long periods of standing and lack of sleep because you also went to the late night shows… it all hurts, man! Festivals are hard. Why do I do this to my body, which is my temple? Why do we? I’ll explore that at another time.

The woman out there is feelin’ me though, as she fainted from heat while waiting outside festival grounds when the gates were held for 45 minutes. Because of last night’s Biblical smiting of Sam Smith via freak storm, the crew had extra work yesterday morning and pushed My Morning Jacket’s soundcheck back, and in a packed festival day, that set the domino effect in place. As a principle, I don’t cover Jacket shows because, speaking of apeshit, Louisville loses their minds so vigorously and unequivocally when it comes to that band that I feel it’s everyone else’s place. I’m good here. It was nice hearing “Gideon” though, I like that song. Some of my photog friends were admonished for snapping some shots of the early afternoon check. Bummer, but I get it. Image control, fam.

Lower Dens kicked off the day, thankfully at the Ocean Stage under the bridge. They’re not an act appropriate for a sweltering afternoon that felt, to quote my main dude Rob Thomas, “seven inches from the midday sun.” The moody and nocturnal disposition of Nootropics and even moreso on their latest, highly cinematic Escape From Evil deserves a bit more ambience, but Jana Hunter and company took care of business. They stuck pretty close to their synth-heavy latest effort, exposing a whole new audience to Hunter’s resonate, incandescent vocals. “Company,’ toward the end of the set, provided Forecastle with probably the festival’s lone true blue blast of krautrock.

Later at the same stage, Dr. Dundiff was the local hero. Continuing the tradition started by The Pass in 2013 and continued with Jalin Roze last year, Dundiff did it right – get all your dang friends in a supergroup and throw the smorgasbord on stage. And so he did, rounding out his left-field full sound brand of hip-hop with members of 1200, Touch AC, the aforementioned The Pass, and oh hey, Jim James too because why not?

My personal favorite moment of The War on Drugs. I swear to the Baby Jesus that this is not meant to sound braggy or like a discarded line from LCD Soundsystem’s “Losing My Edge,” but last time I caught them, supporting Slave Ambient in early 2012, was in a 200-capacity all ages, no beer room in Bloomington with Sharon Van Etten (who also played last year). Now Adam Granduciel is fielding myriad Chaco-branded beach balls in front of thousands at the Mast Stage. Though a lot of the subtle, shoegazing-informed textures that answer the question “what if Bruce Springsteen blazed really good ganj” got lost in the festival atmosphere, the songs of Lost in the Dream were a gorgeous accompaniment to the fading sun on the choppy Ohio River. They had me feelin’ some kind of way last night.

I’d also be remiss to not mention that ILoveMakonnen is really awesomely stupid. I loved that set, and I’m confident in believing that guy is self-aware. It was so incredibly dumb but really fun. Also, King Tuff, another self-aware artist, greased up Headliners during the Forecastle Late Night Show in all the right ways. Catch him this evening!

WFPK, the tastemaking beacon amongst anyone in Louisville who’s muttered the word “sustainable” in conversation at some point, has really beefed up the diversity of their programming as of late, for which I applaud them for. But “hard rockin'” is simply not a descriptor that often finds itself in the same sentence (not knockin’ ’em, triple-A radio just doesn’t shred, ya know?). Not true on Sunday though. The WFPK Port Stage was the place to be.

Twin Limb kicked off Sunday as the new power trio – the original duo of MaryLiz Bender on skins and Lacey Guthrie on accordion, and the recently annexed Kevin Ratterman on atmospherics. Their original gothic (in the Edward Gorey sense) approach now more resembles the majestic slowburn of the sonic Aurora Borealis of Cocteau Twins and Sigur Ros – deserving of a massive festival stage (though decidedly best for nocturnal endeavors).

[Special note: I am personally and professionally involved with White Reaper, so for the sake of journalistic integrity, I will abstain from any comments. But just ask anyone who was there.]

Diarrhea Planet was awesome. They’re from Nashville. They have four (4) guitars. Not including the bass. There’s a bass too. They mix greaser punk with ’70s style, Thin Lizzy/The Sweet-evoking cock rock and it ruled. They obviously embrace humor and trolling and fun and making people uncomfortable with their name – like this grandfather who took to a Nashville area paper to sound off about it. I so regret not making it in time at the beginning to hear WFPK’s Laura Shine say, with a straight face, “Diarrhea Planet” during her introductory announcement. Did anyone Vine it? Hit me up!

King Tuff closed out the Port Stage with his punkish synthesizing of ’70s glam and shades of psych pop. Like Diarrhea Planet, he offers up a nice wink-nudge via a giant backdrop adorned with skulls sporting shades and KING TUFF in a badass flame font, tattoo-ready.

Yes, the Port Stage rocked today and was the place to be. I didn’t regret missing Isaac Brock – the Port Punk had me floating on just fine. Really the only thing that dragged me down is shitty white people with headdresses, conical hats, and various other #problematic apparel that, if one grunted out just an ounce of introspection, should make you feel as uncomfortable as Laura Shine felt saying “Diarrhea Planet.” If I was one of those guys walking around in a yellow shirt, I would’ve kicked you out for being a fool.