LEO Weekly: Muhammad Ali – A loving tribute to a once conflicted city 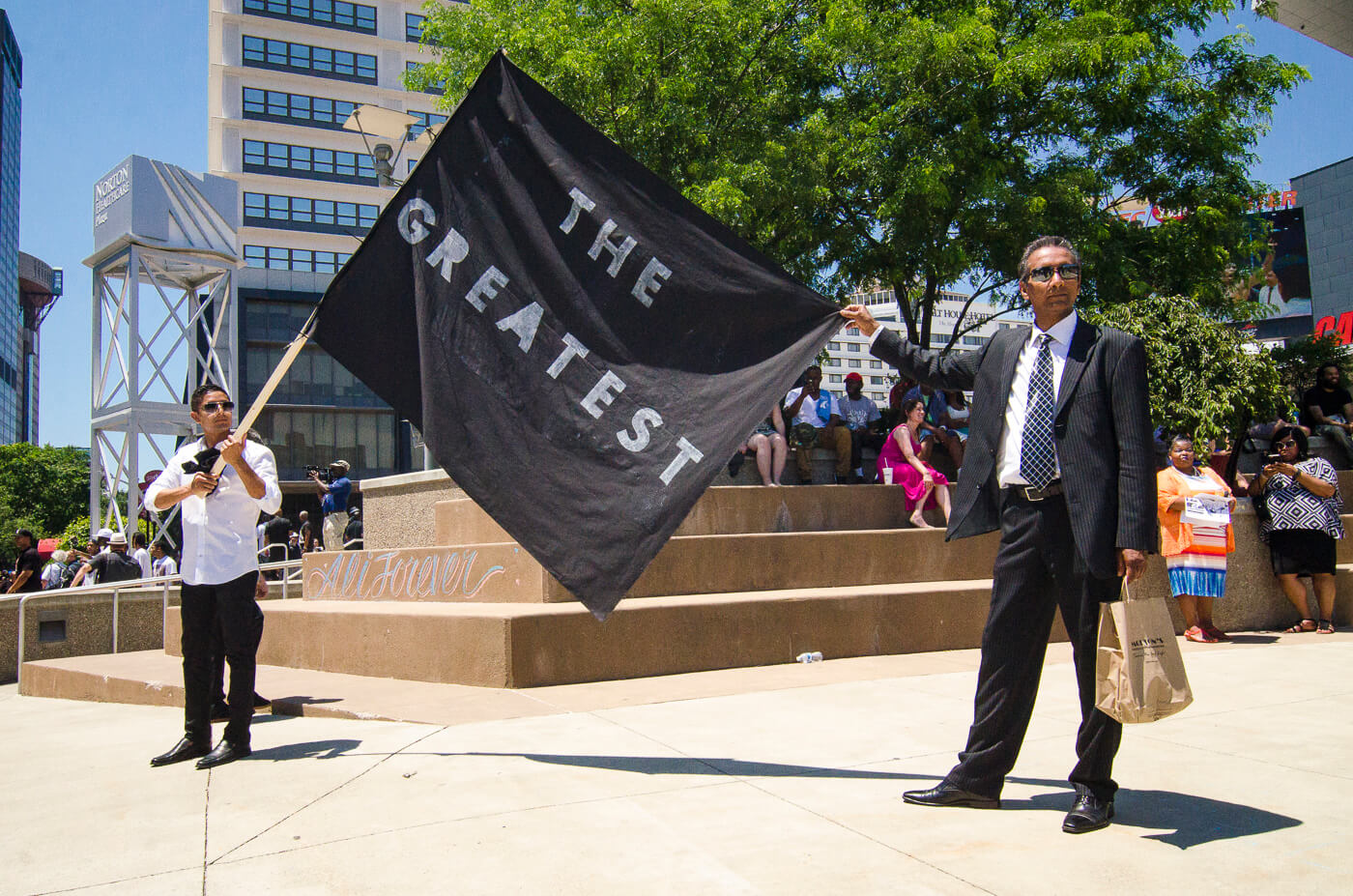 Once in 1,000 years does the world receive a gift like Muhammad Ali. This, from Billy Crystal’s eulogy, just adds more testimony that “The Greatest of All Time” is the most famous person in the world. And a personality that colossal requires at least two days of memorial to honor his legacy. Louisville delivered that last Thursday and Friday, each as sharply contrasted as was the man himself and the dichotomized city he called home.

Indeed, Ali was filled with, and surrounded by, contradictions and ironies. His platform for advocating peace arose from his fame for gracefully knocking around men in a ring. Though beloved now, Ali was at best controversial and, at worst, reviled in his old Kentucky home: The state Senate proclaimed in 1967 that, “His attitude brings discredit to all loyal Kentuckians and to the names of the thousands who gave their lives for this country during his lifetime.” Louisville rejected the chance to host the Ali-Terrell bout, and The Courier-Journal, the newspaper of record, refused to acknowledge his free name until 1970. Now every camera in the world is turned to this city, wherein politicians and lawmakers for a government that once made Ali an FBI COINTELPRO target — a program that resembling something a significant portion of the GOP would likely support reactivating — now bowed their heads. And for all the progress the world has made since Ali pronounced that “the real enemy of my people is here,” his city of Louisville, deemed a “compassionate city” by Mayor Greg Fischer, is still starkly segregated and his west end neighborhood remains economically underserved. Meanwhile, the struggle for people to be free has never waned, as 49 people in an Orlando LGBT dance club were viciously gunned down in a hate crime less than 48 hours after the world mourned a figure of equality and resistance, by a man claiming the same religion as Ali.

But Ali, in his death, provided his final act of resistance — by confronting America’s Islamophobia head on with a massive inter-faith ceremony in an arena named after American fast food. It was in this city that hundreds of thousands welcomed “The Louisville Lip” back home as our most beloved son. It was sweeping, magical and buzzing with palpable energy, in which every corner of an often-divided city joined together to toss roses onto a hearse. It was history.

While Friday brought the fanfare and jubilance congruent to Ali as the spirited public figure, Thursday offered a day of reflection that more resembled and celebrated a deeply spiritual man. Taking place in the facility that hosted some of “The Champ’s” earliest bouts, Freedom Hall became the grounds for what is surely one of the largest Jenazahs, or Muslim funeral service, in American history. It was planned by Ali himself, who requested the service be open to all faiths. Less than a month ago, under the glow of the Expo Center’s array of circular fluorescent lights, the perennially vexing NRA held its annual meeting. On this day though, the room’s air felt heavy under the gravity of a man who roamed the streets sans security detail.

“I have no guns, no police,” he famously said. “So if someone’s gonna get me, tell them to come on and get it over with — if they can get past God, because God is controlling the bullet.”

On this day, the walls reverberated beautiful songs and prayer led by Sherman Jackson. “He inspired us, built us up, gave us courage, and taught us how to fight — not only inside the ring, but outside as well. This is the stuff that transformed the lives of millions of black Americans — myself included,” Jackson said. “He put the question of whether a person can be a Muslim and an American to rest. Indeed, he KO’d that question.”

The room spoked in hushed tones, creating a powerful quiet despite attendance upwards of 16,000. Yusuf Islam, a.k.a. Cat Stevens, carried the casket. Nation of Islam leader Louis Farrakhan, Turkish president Recep Tayyip Erdogan (who left immediately after), Sugar Ray Leonard, Don King, Jesse Jackson and others joined Muslims and non-Muslims to pay respects. Early in the service, the imam asked those who did not practice the faith to move toward the room’s pillars to make room for practitioners at the front. Many in attendance could not see the casket or the speakers. Certainly the press couldn’t, partitioned off to the side.

Larry Taylor, a lifetime fan who attended the Jenazah and mentioned he trained at Baxter Gym along side Louisville’s other boxing great Greg Page, felt a little disappointed by this. “I know he was a Muslim, but he was a human too. Everybody should’ve gotten a view. I just didn’t get that part,” he said. Taylor, however, said the ceremony as a whole was “very nice.” This sentiment was murmured a few times within earshot outside Freedom Hall. “The Champ” said it himself when he said “I belong to the world,” but the world was welcomed to something that’s generally private. Of course, when it comes to Muhammad Ali, the usual rules never apply, and the argument of his public persona was mentioned on both sides.

“I think we needed to do this,” said Emad Aljaber, who drove up from Knoxville, Tennessee, and said he never missed a fight growing up watching Ali. “He wanted his religion to a part of him and I think we did the right thing. Hopefully that will make him smile. It’s supposed to be open to the public because that’s who loves him — the public. That’s what people loved about him, how public he was. He loved everyone, and everyone loved him for who he was, whether they liked boxing or not.” For me, I felt like I was invited to something extremely personal, humbling, and compelling that I may not have witnessed otherwise. That there was not much to see was immaterial — the other senses simply became overwhelmed. Sanna, a young woman who wished only to be referred to by her first name, succinctly described it as “peaceful.”

While the memorial service at the Yum Center may be considered the cornerstone event of the city’s multi-pronged celebration of his life, the Friday morning procession was truly the once-in-a-century event. It shook the city, and the world. Eric Crawford in his essay for WDRB nailed it in his lead. “Louisville, that’s never going to happen again. Not what I saw on the streets of my hometown Friday. Not the people lining them for 20 miles. Not children running alongside a hearse, throwing jabs into the air. Not grown men trotting to kiss the roof. Not flowers covering the windshield.”

I stood in a crowd of thousands under the shade of an old-growth tree at the Victorian gates of Cave Hill Cemetery awaiting the motorcade. That it was running 90 minutes late mattered little to anyone, the energy was electric. Every corner of the city was represented at this corner. Children with homemade signs, revving motorcycles, families of every strata within the community, it was a festival atmosphere on a balmy summer morning that instantly hushed for a minute as the hearse, whose windshield was almost completely buried in flowers as it arrived at the last stop, gracefully rolled over a path of rose pedals leading to Ali’s final resting place. A pair of balloons lifted over the crowd’s silence just before the chants began — “Ali! Ali!”

Those not choked up remained in the minority.

“Seeing the pedals, it was so visually impactful that I felt like it was something we couldn’t miss,” said Laura Bailey, a Cherokee Triangle resident who arrived early to wait against the barricade. “I have family there too, so it’s a special place. I wanted to see that part of Cave Hill’s history. People were packed in and nobody moved. It was such a special energy, and when people started chanting, it was so moving that I couldn’t even chant. I’ve never seen a hearse decorated in flowers that people wanted to touch and try to understand the person was leaving the world. I’ve never encountered that. It’s something you’ll never see again in your lifetime,” she said. The pedals will now provide a physical keepsake for many of the thousands who witness a powerful moment in the city’s, and the nation’s history.

I headed to the KFC Yum Center for the final fireworks, whose start time was also delayed. Without telling anyone, the arena locked out all press who arrived after 2 p.m., which means if you attended the procession, you probably did not attend the final service. I stood with a camera crew who flew from Brazil as we were turned away. No matter, the view from the Belvedere, where the service was projected onto large LCD screens, was more than satisfactory (though my travel time was undoubtedly shorter than the other news crew). In lawn chairs and under tents, hundreds gathered in the sweltering afternoon sun to witness a menagerie of speakers as faceted and complex as the man himself — from one of the longest-serving Republican senators to a comedian to the 42nd President. Lonnie Ali’s stunning speech encapsulated “The Greatest’s” life better than could any writer on this planet, who also dug into Muhammad Ali’s preternatural ability to exist, and even flourish, in a world of contradictions. After all, it was a white police officer in the time of Jim Crow who introduced a young Cassius Clay to the art of boxing. “America must never forget that when a cop and an inner-city kid talk to each other, then miracles can happen,” she said to thunderous applause.

Indeed, miracles happened in Louisville last week. And history. Currently there’s a petition to rename Louisville International Airport, which would function beautifully as ALI in the IATA code format. There’s talks of a holiday. Fathi Husain, who laughed and joked with his group outside of Freedom Hall, recalled breaking down into tears when he watched Ali light the Olympic torch in 1996. “I wish I had half of his courage. Sometimes he was against the whole world and he didn’t care. He was willing to sacrifice whatever it took, and was on the right side of history. The world is starting to move to his side, where racism and bigotry is not acceptable. I haven’t seen a man with as much character as him.” It certainly seemed that way last week as people of myriad beliefs peacefully gathered in our city for a single cause, and for a couple of days in the wake of Ali’s passing, it seem the world might realize “The Champ’s” vision. It’s obvious Louisville and our country, for all its flaws, want more of that feeling, that magic, that power.