LEO Weekly’s WELP!: A seat at The Table 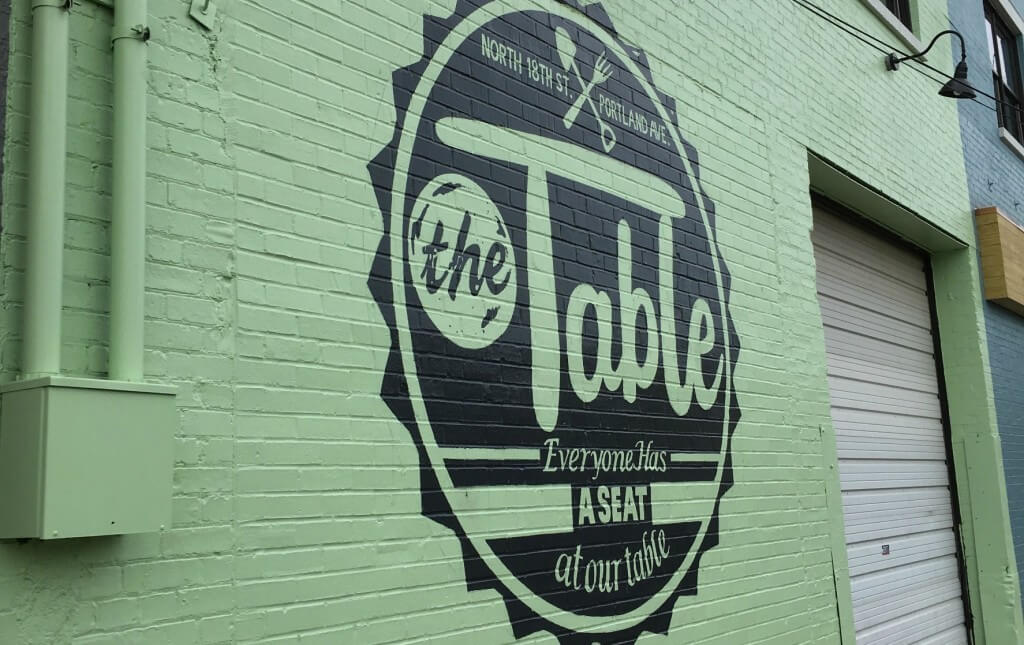 Louisville will see two new additions to the dining scene this month. One will bring the city’s very first completely pay-what-you-can model, a concept that accepts both American Express and sweat equity, offering a solid dining experience to an underserved food desert at price points actually reflective of the neighborhood’s median income. The other will have… charcuterie. And boozy milkshakes! One has received a substantial torrent of local media buzz and features before even opening their doors. The other hasn’t. Can you guess which is which?

That’s not to say anything negative of the other, as I’m pleased to see a new spot open in my own neighborhood that may or may not rhyme with Gutchertown Brocery. I definitely plan to dine there. But Portland’s new The Table has a story more important and trenchant in the fabric of the community that spreads far beyond simply an interesting menu and name recognition. And it also doesn’t fall victim to the ‘new spot in town’ narrative, because The Table isn’t here to be trendy. The Table has, as it states in its slogan, purpose.

Only Jere Downs has made any mention of The Table in her dining features, and shouts out her. But to the rest of Louisville Media, nuts to you. Nuts. To. You. You’re on blast.

But enough of the media criticism … what am I, Jay Rosen over here?

The Table opened last Thursday. I stopped in for lunch on Friday afternoon.

Pulling up to the large complex at 18th and Portland, I made sure to take some time before heading in to pat myself on the back for crossing “over the nine” — colloquially known as tackling the arduous journey of trekking into the unknown territories west of 9th Street that shoots pangs of visceral fear through the souls of Louisvillians who own a Whole Foods Rewards card. Great work, me. After a heart-racing, trepidatious expedition from my home in Butchertown, a celebrated and trendy neighborhood that smells like shit, through the central financial district (hands down the dopest name for a downtown in all of America) to the far reaches of a strange land composed of totally modest historic homes and warehouses hugging the curve of the Ohio River, I made it to The Table after a harrowing eight minute drive.

Flanked by single family houses in various states of repair — from gorgeously immaculate to “could use some love” to some light urban prairie — The Table’s building complex stands out. With its sharp directional vectors, vivid green and steel exterior colors, larger than life sandwich board, and high contrast insignia — informed by vintage design standards — splayed across the front wall, The Table looks Nulu-ready.

But it’s not in Nulu, and it’s not a hot new offshoot from an established chef. It’s an experiment in social entrepreneurship. It’s a dining concept launched by a church. Portland’s Church of the Promise, to be exact.

For many people like me who do not necessarily identify as any particular faith, the proselytizing nature of religious ventures in the private sector can often be what we call in the industry a spicy meatball. But unlike other entities in the hip-business-tied-to-a-congregation complex that I shall not name here for my own safety, Church of the Promise is transparent about its faith-rooted mission on both the website and The Table’s menu. More importantly, Church of the Promise seems to be one of the good guys — a progressive church who not only took on the risk of a secular model business reliant on a certain level of altruism within the framework of a religious enterprise, but also declares within its own mission statement “a deep value and concern for marginalized people, the poor, the broken, and the outcast in His community.” Christian outreach can feel uncomfortable sometimes. I did not feel uncomfortable about their mission, and certainly not when we ate there. In a world in which people are hand-wringing over the lack of Christmas imagery on Starbucks cups, the unequivocally cheerful face of The Table’s staff is exactly the type of outreach people of faith should want representing them. At the same time, it’s worth mentioning that unless you notice the church signage on the other side of the complex, you would never know. The fact is that giving people a dignified dining experience on fair-to-generous terms, within a sustainability-minded blueprint that brilliantly fills a much-needed niche in the neighborhood, should appeal to anyone’s convictions. In other words, don’t get twisted about the church angle if you’re otherwise prone to do so.

So now that’s out of the way, can we talk about the restaurant?

Bright and replete with beautifully stained wooden tables, a speckled concrete floor, and exposed rafters, The Table borrows heavily from industrial chic, while cultivating a warm and welcoming atmosphere. While the milieu therein is apropos of any fresh upstart within a competitive culinary scene, The Table differentiates itself immediately in conversation. Almost everyone who works there is a volunteer and, save for the chef, also a restaurant novice.

We sat at a two top against the window facing 18th Street on an unseasonably warm and rainy afternoon. The dining room was packed at 1 p.m. in the cafe’s cozy quarters. The partitioned room on the restaurant’s southern wall was also full. It looked like a type of private or party room, but given The Table’s business model, it’s probably neither. I did not ask.

The Table is currently only open for lunch, and while their menu is of a reasonable size for a purveyor of midday sustenance, “the special” is the obvious move — sandwich, side and drink for a suggested $10. That’s a good deal, bring me the special.

My date ordered the smoked chicken sandwich with the golden potato soup. I gripped the veggie “cheesesteak” with parmesan fries. We food shared. The veggie sandwich came packed with mushrooms boasting a smoky and succulent profile, topped with caramelized onions and their Ale-8-One cheese, which in both flavor and consistency resembled a mild beer cheese. The marinated fungi were delicious. The sandwich would do well with a less dense bread, as to not overpower the nice balance of sautéed vegetables therein. The fries featured a generous sprinkling of parmesan and golden crunch. The smoked chicken sandwich also showcased a grill-forward flavor, topped with kale, red onion, buttermilk ranch, and bacon jam — the latter two features added only in conservative measure, as too much would be rather sloppy. Both plates came with a small side of house-made pickled veggies — a nice touch. A note to all restauranteurs — ain’t nothin’ wrong with throwing some pickles on the side of the plate, ever.

The verdict? Lunch was good, on par with the much-missed Joe Davola’s or City Cafe on a good day. The pork sandwich I saw coming out of the kitchen looked like it might be the star of the menu, stacked high and beautifully plated on a kaiser roll. But I don’t eat pork since, as mentioned, I live in Butchertown. Understandably, The Table had kinks to work out in the food and service — not only is the second day tough for any new restaurant, but almost everyone working was a volunteer with little restaurant experience, all within a concept completely new to this city. That things seemed to run as smoothly as they did is nothing short of… should I write this… OK, I’m writing it… a miracle.

The pay-what-you-can model is inherently tricky, as it requires a bit of, ahem, faith… at least in the nature of human beings. You essentially bet on the utopian notion that everyone will contribute their fair share according to their means without being forced to do so. The very first experiment in this type of social dining in the area, Shelbyville’s Harvest Cafe, seems successful, albeit this is not their business model full-time. Panera has toyed with the idea in a couple ways, to varying results. Panera Cares Cafes, which total four nation wide, see about 70% the revenue of a traditional Panera. Their pay-what-you-want turkey chili experiment did not fare as well. As for The Table, one of Louisville’s best qualities is the level of local support the city gives toward new ideas, undoubtedly true within the food scene. The Table should succeed, and definitely could — as long as people get involved, vote with their dollar or time, and most importantly, find out it exists. I also hope this serves as a bellwether for additional thoughtful development in a unique neighborhood like Portland.

Upon paying for the meal at the counter near the entrance, I asked if it was possible to give my time forward in the same way you could buy another person’s meal upfront. That’s not part of the model yet, but I want to volunteer at some point soon. That could certainly serve as an action-packed future installment of Welp, and perhaps part of my contribution can be a well-deserved pro bono publicity campaign too.