VICE: How to Sue Beyonce 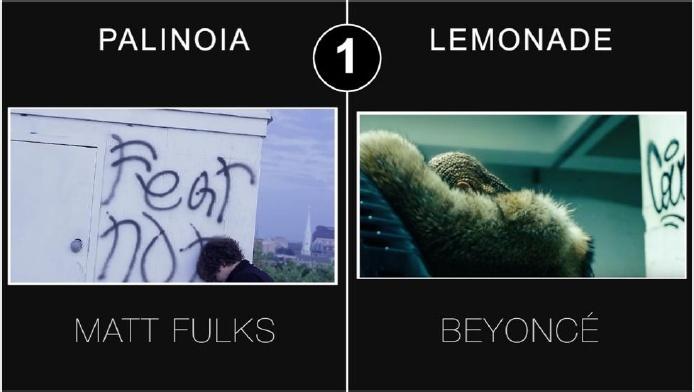 Threats of lawsuits are nothing new in the Beyhive. Beyoncé’s team’s experience with swarms of litigious activity certainly influenced the lengthy credits for this year’s visual pop culture achievement, Lemonade. But the case of Matthew Fulks might feel a bit different.

By day, Fulks works as a video editor at the local Fox affiliate in Louisville, KY. On the side, he conceptualizes and directs music videos for local artists in and around the city. They’re quite good. He also experiments with more abstract approaches, like the 2014 short film, Palinoia, shown at the 48 Hour Film Festival.

This is the film that, through a series of curious events, led to the complaint filed earlier this month (that can be read in its entirety) in which Fulks claims elements of his work were appropriated for Lemonade—the trailer in particular. The complaint references specifically “graffiti and persons with heads down,” “red persons with eyes obscured,” “parking garage,” “stairwell,” “black and white eyes,” “title card screens,” “feet on the street,” “the grass scene,” “side-lit ominous figures,” as well as the voiceover audio and the auditory timing in the soundtrack. So, a lot actually, and collected as a whole it seems impressive. But is it even plausible that an unknown hobbyist filmmaker could have his work straight lifted from Beyoncé’s camp, and if so, how would he prove it in a court of law? For the laymen, there are a few legal prongs that must be satisfied to even entertain a copyright infringement lawsuit.

Brian L. Frye is a professor at the University of Kentucky College of Law who specializes in copyright and intellectual property. As luck would have it, he’s also a filmmaker. According to Frye, the first two copyright hurdles to clear are easy: that the work is copyrightable and that you own it. “Copyright can protect just about anything. The originality bar for copyright protection is so low that basically everything satisfies it,” he said.

To prove that, the plaintiff—the filmmaker in this case—must show a “probative similarity between the two works,” a likeness that can be proven, and that the offending party had access to the work in question. “My friend Greg Dolin at the University of Baltimore came up with kind of a memorable formulation that he refers to as the Kevin Bacon and the Leonard Cohen approaches,” said Frye. “In the Kevin Bacon approach, you look for degrees of separation between the two works. In the Cohen approach, everybody knows that work, so you don’t have to show the chain of custody anymore.” Per the latter, that type of thinking might’ve come into play during the Tom Petty vs. Sam Smith infringement claim.

As for the Bacon chain, enter Chris Thomas, an artist manager at C3 in Austin who works with the likes of Houndmouth (also a Louisville artist), Bully, and others. Thomas attended law school but he does not practice as a lawyer. However, he possesses a unique and credible perspective in the Venn Diagram center of the issues around the Fulks complaint, not to mention the person who helped open the bridge between Fulks and the industry at large. “I think Matt has a solid case. He’s got legs to stand on,” Thomas said.

Thomas reached out to Fulks to direct a video for Houndmouth because he liked his work and they shared some mutual friends. As stated in on page three of the complaint, Fulks then asked Thomas to send his portfolio up the industry flagpole in the hopes of generating some new contacts. This included MR MS’ management, who forwarded the original email between Fulks and Thomas along to Bryan Younce, vice president of video at Sony Universal. Younce reached out to Thomas, requesting Fulks’ information and to invite him to submit additional storyboards and treatments. Got that so far? While it feels like the type of mind-mapping straight from Rustin Cohle’s storage unit dispatch, replete with newspaper clippings and yarn, the key factor to note is that Younce is one of the names credited on Lemonade, which began filming five months after the initial contact. So by the Kevin Bacon approach, that’s three degrees.

Whether Younce or someone else within Sony Universal and/or Columbia viewed Palinoia specifically, and whether that inadvertently (or otherwise) burrowed into the subconscious of a creative tasked with storyboarding Lemonade is anyone’s guess. But the aforementioned access is there. “I think that parallel thinking is ruled out in this case, at least from a legal perspective, because of the access,” said Thomas on the idea of creative coincidence. “If there was never access, that’s where cases of parallel thinking play as a defense. That someone who directly worked with Beyoncé before had access, and after receiving the link, reached out for Matt’s contact info… I don’t think anyone would’ve reached out had they not seen at least some of his work,” he said. “Whether anyone from Columbia clicked on the link or not, it was in their inbox to click on. And that’s enough to show they had a reasonable chance to access it.”

Noisey also spoke to an attorney in Los Angeles who works in music publishing who asked not to be named because “Beyoncé’s kind of in our world just a little bit.” The long arm of Beyoncé, folks. “[Access] is very helpful to their case so they can show that someone related to the project received, or at least had seen, the original video that’s being claimed as the basis for a copyright infringement suit,” he said. “But access is only kind of relevant if you can show substantial similarity to copyrightable expression,” he added. “So it’s not a smoking gun by any means.”

And thus, the central question that launched a thousand bee emoji-laden YouTube comments. We know at least some part of the team responsible for Lemonade had access to a Matt Fulks joint, but are the two really similar enough to suggest plagiarism?

Thomas thinks so. “The are instances of almost identical visuals. They didn’t literally lift [some of the shots] from his work, but they used the same set-up and recreated a few of [the shots], maybe even expanding on a couple of them too,” he said. “And the audio is very similar—this industrial, bass-heavy sound. While there’s not a particular melody to follow or anything, there’s an overall mood and feel in both.”

However, mood and feel are not really protectable. This addresses a very important notion in copyright law known as the idea-expression divide. “Copyright protects expressions; it doesn’t protect the underlying idea,” said the Los Angeles attorney. And if the elements of the work in question aren’t protected, there is no infringement.

Frye expands on the idea-expression spectrum. “The more abstract the particular element you’re talking about is, the more likely it is to be an idea, and the less abstract, and the more concrete and specific it is, the more likely it is to be construed as an expression,” he said. In the complaint, Fulks’ attorneys do argue that both Lemonade and Palinoa share “visual and auditory elements, visual and auditory sequences, themes, format, mood, setting, plot, and pace” before specifically enumerating the “elements of protectable expression.” Those would be the screenshots and audio clips floating around the news cycle you may have already seen.

It’s here, according to the music publishing attorney, where one can more easily bypass the structures in place to protect copyrightable art. “If I want to write a story that is very similar to The Great Gatsby, I can basically rewrite it with different words, steal the entire concepts underlying the story, steal the structure of the story, and I’m not going to be liable for copyright infringement because it just takes little tweaks here and there to make it not substantially similar under copyright law,” again alluding to the gulf between expression and ideas.

And yet when the estate of Marvin Gaye sued Robin Thicke and Pharrell Williams over “Blurred Lines” copying the “vibe” of “Got To Give It Up,” the court handed down $5.3 million in damages to the Gayes plus 50 percent of the song’s royalties. Despite the song’s eminent grossness and Thicke’s extreme punchability, the decision is still a very bad one for the music industry as it flies in the face of what is considered protectable expression in case law. “Fundamentally, the plaintiffs won in that case not because they put on a great showing of infringement, but because they showed duplicity and bad action on the part of the defendants,” Frye said.

But there’s a good chance it won’t even go to court. Considering the publicity and legal muscle behind the complaint, this is nothing more than a nuisance to Sony Universal, Columbia Records, and Beyoncé’s hired hive who might elect to settle what essentially amounts to a drop in the bucket to make it go away.

I interviewed Matt Fulks prior to the filing of the complaint. After the story hit Pitchfork, TMZ, Spin, and Billboard—all within a couple hours—his attorneys embargoed any on-record quotes. As such, I can only editorialize that Fulks doesn’t seem to be interested in money or an official credit. Perhaps he felt that something of the artistic stature like Lemonade resembling his own work, or at least pulled from the same collective unconscious pool, validated his art in a new way and, knowingly or otherwise, taking her creative team to task was one way to get his name out in an unkind industry with sticky protections on art.

In the abstract, suing Beyoncé as an obscure artist is an absurd and, obviously, newsworthy route. “I just feel weird about it overall,” Thomas said on his feelings trying to do his friend a solid last summer who is now shoring up affidavits. “I think that it almost went somewhere, and it still could go somewhere, whether that’s with Columbia or other labels, and he can get some work. I don’t necessarily feel like it backfired because it could’ve led to something.” For a filmmaker with a nascent career, it undoubtedly will at this point.