VICE: You Have Faust’s Improvisation to Thank For Everything You Love 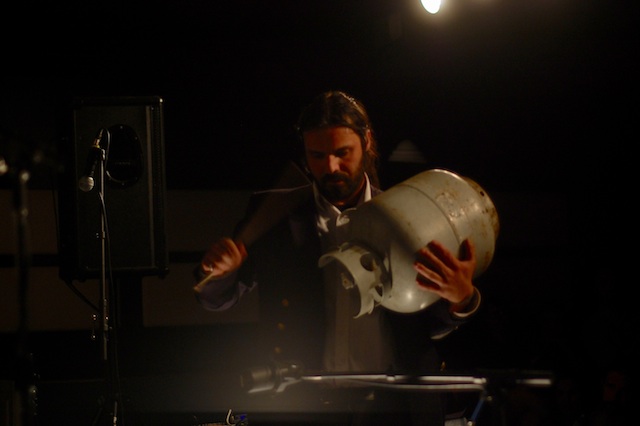 Holy trinities are a snooze of a trope—from the Christian doctrine, to celebrity deaths, to Zelda, and even to Cajun cooking (that’d be onions, bell pepper, and celery for the uninitiated gourmand). Yeah, three, we get it. But that narrative works well for the perennially revered early 70s German avant garde and art rock movement still tragically referred to as krautrock. Kraftwerk, Can, and the left-field Faust were all birthed from a post-WWII Germany in shambles they hoped to help reinvent, swappin’ free love and drugs for free jazz and komische.

While this triage of razor-focused 4/4 apache beat purveyors of highly engineered (as the Germans are wont to do) psychedelic and experimental music maintained niche status throughout much of the 20th century, it reverberates throughout disparate artists and genres today. Kid A borrowed heavily from it. So did Wilco when they got weird with Jim O’Rourke in the mid-aughts. Animal Collective’s different career segments basically illustrated one of each of the kraut triad. New wave owes no small debt to krautrock. Add in My Bloody Valentine’s obvious liberal borrowing of krautrock techniques and the influence expands like pi. There’s an argument to be made that half of Taylor Swift’s 1989 nods that direction. 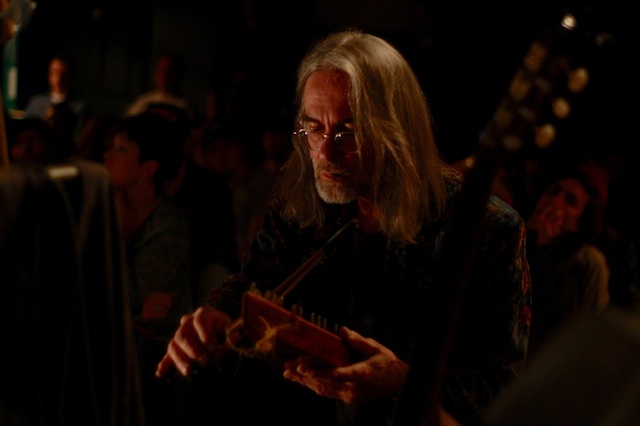 Can possessed hypnotic funky grooves and Kraftwerk’s motorik allegiance gave the genre disko cred, but it was Faust who served as the weirdo Dada-informed distant cousin more interested in improvisation and poetry, undoubtedly the muse unto which Sonic Youth owes royalties. And yet, Faust was the only one of the three to boast a major label contract—specifically the upstart Virgin Records who went on to release both The Faust Tapes and Faust IV in 1973, and even an collaboration with minimalist pioneer Tony Conrad on its subsidiary Caroline Records the same year. Faust also had the distinction of being the only artist of the scene to acknowledge, cheekily or otherwise, the much-maligned moniker by opening the Faust IV LP with the 11-minute “Krautrock.”

Minutiae aside, Faust was the outlier of the outlier—the most cerebral yet loose and humorous of the bunch, and all that was on display in an almost absurdly intimate setting in Louisville, Ky. Sunday evening. As Faust co-founder Jean-Hervé Péron mentioned in passing, pacing the floor instead of the stage, the current tour was only their fourth excursion to North American in 40 years, and one that only boasted a small handful tour dates. Two of them happened in the Commonwealth of Kentucky (turns out they have quite a few friends here) and their stop in Louisville was Dreamland, a non-profit listening room that holds fewer than 100 people after the pews are removed. The pews were a remnant of the building’s former life: the chapel for a homeless shelter, with a few low rent units above. The shelter has since moved locations, but the apartments above remain, and those tenants got a free taste of the Zodiak Free Arts Lab whether they wanted some or not. 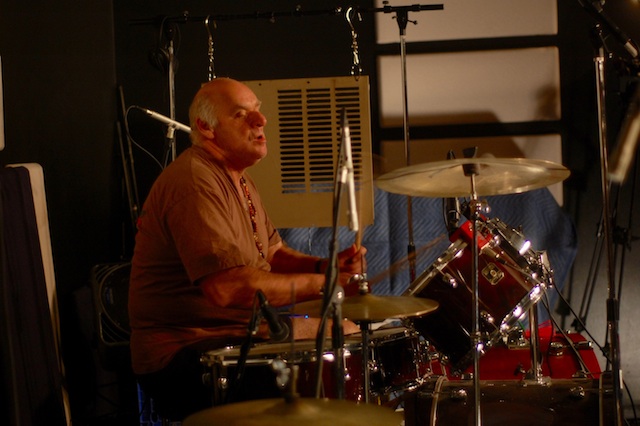 Sans any opening act, the evening began as Péron instructed everyone to have a seat and get comfortable for the sold out show, distributing Faust-branded airplane blankets for eine kleine picknick. Friendly and palpably affable, Péron’s choice to wear his own band’s shirt under a paisley-patterned blazer can certainly be forgiven. And of course, all those ancillary details became immaterial once Faust transitioned from the opening drone to the double percussion assault punctuating the “Harlekin”/“Dada” medley.

Joining Faust co-founder Zappi Diermaier on the skins was Dreamland co-founder Tim Barnes, making good on their tour mission statement to incorporate different local musicians in each city they perform. Beyond bringing in outsider artists and film to the East Market neighborhood before it completely food-served-on-a-board gentrifies, Barnes had a hand in playing on or recording a number of titles you might own, including work with Sonic Youth, Jim O’Rourke, Silver Jews, Royal Trux, and The Tower Recordings, just to name a few. 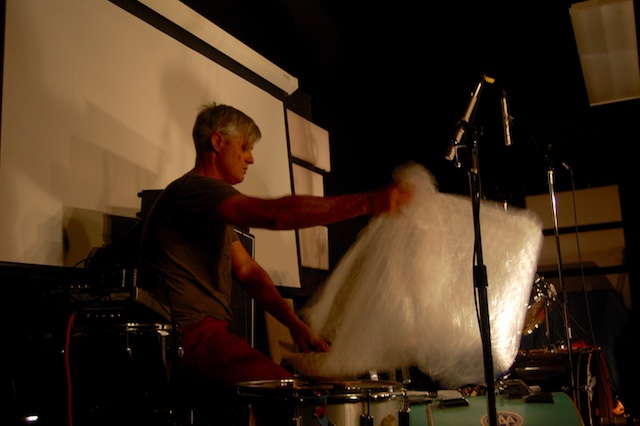 A masterful improvisational jazz drummer in his own right, Barnes also had to add bubble wrap to his repertoire because that’s what happens at a Faust show. Diermaier replaced crash cymbals with what looked to be the side paneling of an air conditioning unit. On Faust’s second US tour in 2009—the last time they performed in Kentucky, at Boomslang Fest—they included a functional cement mixer on the stage plot (which would’ve unequivocally upset those upstairs neighbors).

Péron did lament not finding a 200-pound oil drum to augment the evening’s performance. Other cities featured this added bit a junk to further Faust’s 2016 image as a captain of industry, even going so far as to note “oil drum” on the set list. Not tonight, though. “It seems you have a very clean city,” he remarked moments before easing into Faust’s version of environmental advocacy in song “Listen to the Fish.” Touring technologist Maxime Manac’h had to make do with a propane tank instead, bolstering the flashing industrial imagery of machines and factories across Dreamland’s back wall and Diermaier’s aforementioned HVAC-informed drum kit. 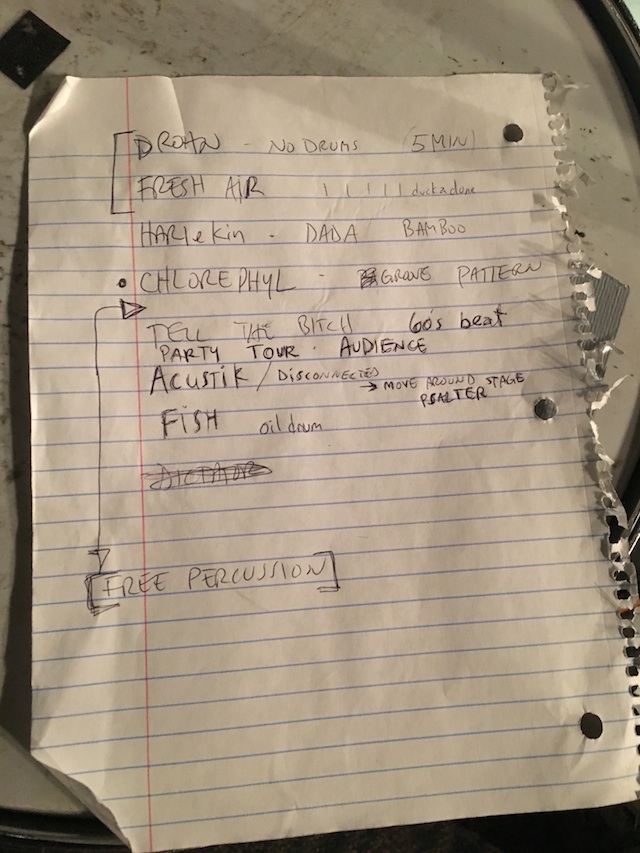 Not content with sticking just to industrial tools, Faust made the audience part of the improvisation during “Party Tour,” with Péron sitting with the audience, no doubt on one of those sweet Faust blankets, as sketches of shapes and lines moved across the projector screen for the room to interpret with their own voices. Though a lot of “oohs” and “aaah” permeated the air above, one person shouted “sputnik!” as his onomatopoeic interpretation, apropos of nothing and decidedly excellent.

Beholding one of the German experimental music movement’s forbearers, one that offered the sonic launchpad for everything from David Bowie and Joy Division to Tortoise and Stereolab, is an increasingly rare experience these days. Can and Amon Duul II are no longer options, and uber-scarce Kraftwerk tickets at a price affordable to the 99 percent are a nice commodity if you can get it. The fact is, like their peers, you’d be hard pressed to find artistically rich music today not touched by Faust—truly the last of these types of artists accessible to the common live music enthusiast. Uncompromising just like their craft, Faust could’ve performed a large art gallery or a niche festival. Instead, they chose to preach their sermon in a quaint church hidden away in an alley. As no two performances are the same, the show served as an extremely ephemeral experience as whimsical as the art of improvisation itself, and one witnessed by only 100 people.

Michael Powell is a writer based in Louisville, Kentucky.