LEO Weekly: Welcome to the Taylordome 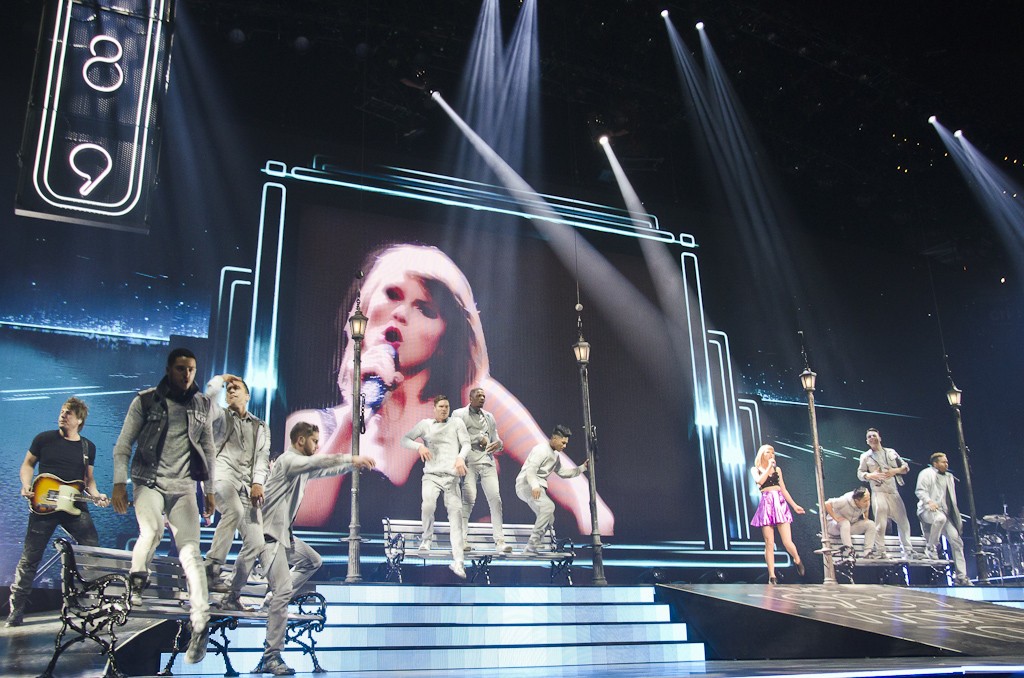 Not since news of the new FC league, or maybe the #LouisvillePurge, has Kentuckiana seen such a wide-reaching since of shared excitement as Taylor Swift returning to the Yum Center. Teenagers wanted to be there, along with their parents. My tattooed late 20s/30-something friends wanted to be there. The ghost of Hunter S Thompson was probably somewhere too, bemoaning with great elegance the price of a highball at this god forsaken place. And that speaks volumes of T Swift. Her easily-relatable, instantly-hummable saccharine pop is earnest enough for those who like their anthems sincere, yet self-aware enough (a la, say, the “Blank Space” video) for the cynical sect. Truth be told, the reverberated production isn’t too far removed from Purity Ring or Cold Cave, if we’re being honest with ourselves. Lest any of the self-referential haters deny, she just brought out the big guns with Kendrick Lamar, who perpetually bats 300, to lock in her authenticity capital for the new version of “Bad Blood.” And what other artist has about-faced as, ahem, swiftly as she since… Radiohead? If Fearless is her The Bends, then it follows the synth-heavy and pretty killer 1989 must be her Kid A (hopefully Taytay’s follow-up won’t be a Hail to the Thief turd in the punch bowl). [NOTE: All pimpled-faced, vaped-out nerds butthurt that I compared Taylor Swift to Radiohead may direct hate mail to john.schnatter@papajohnspizza.com.]

As for who actually showed up last night though, it was decidedly a majority young girls who blared a mighty high decibel roar as Taylor approached the mic “we may be in the wonderful city of Louisville, but our story tonight starts in New York,” kicking off the night with album opener with “Welcome to New York.” From there, Taylor and a menagerie of backup dancers and a virtually hidden, studio slick band barreled through the electronic pop of Swift 2.0. Save for “Love Story,” she completely shed her Nashville country skin, sticking close to the 1989 script, with the occasional Red banger peppered in, including a cinematic, orchestral, pretty great reworking of “I Knew You Were Trouble.” Costume changes abounded, lip syncing was (refreshingly) very minimal, and the choreography properly complemented her generally charming awkardness (whether legitimate or feigned, doesn’t matter). Her musicality is unquestionable, switching between various instruments throughout the evening and taking any numbskull rockist’s claims of pop stars lacking talent rightfully to task.

Beyond the performance, though… well, that aforementioned earnestness and her own image building collided head on, producing deeply weird results. If “aw shucks” asides could be converted into energy, Taylor could’ve sustainably powered the entire Yum Center, production included. During costume and set changes, The 1989 World Tour featured interludes of video testimony with Selena Gomez, Haim, Lena Dunham, and others, splayed across massive LCD screens, ruminating on how much they love being Taylor’s friend. Between songs, Taylor regaled stories in which she referred to the audience members as her friends, particularly during her “happiness is fleeting” soliloquy – undoubtedly the evening’s Death of a Salesman moment. Taylor is your friend. Taylor understands. Taylor is real. Taylor feels sad sometimes too, but it’s OK because you are invited to the slumber party and there are snacks. Taylor loves you, and she relates. And to be fair, her persona, which I don’t believe to be completely constructed, does remind me of people I know and like. But there’s a ceiling of relatability for someone who’s been a superstar since 18 – on both sides. Oh but she’ll try! And that’s where the narrative got pushed to its breaking point and started to feel like cuddly, mimosa-fueled propaganda. Between that and the (admittedly cool) synchronized light-up bracelets strapped to the arm of every concert-goer on the way into the building, things resembled less 1989 and more 1984. Except that it felt really really nice.