LEO Weekly: What National Media Miss About the Dining Scene 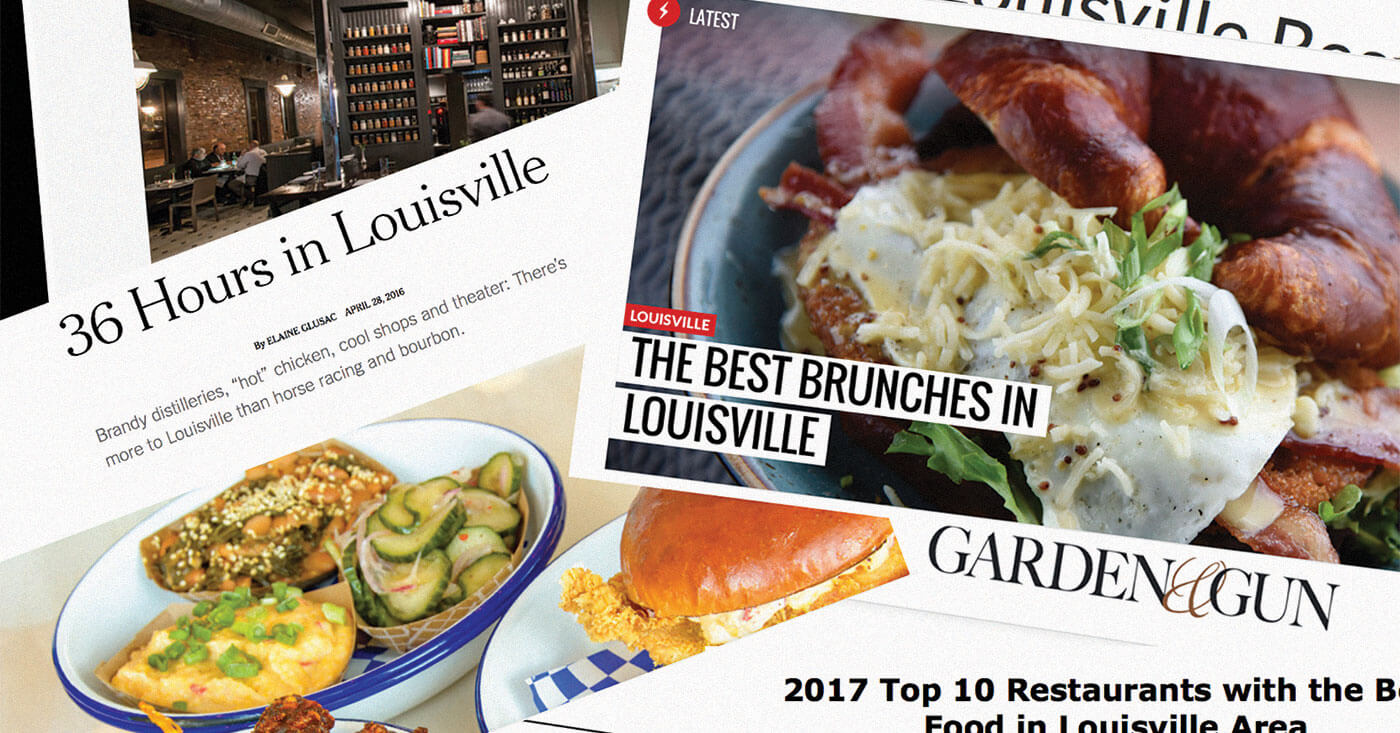 You might get lucky if someone exclaims “Oh, Muhammad Ali!”

But chances are, go anywhere in the world, mention you live in Louisville and expect the requisite: “Hey, KFC!” Which is not totally unfair — the immediate sight I beheld exiting a Tube stop during my first trip to London (the British one, not the Kentucky town near the Harlan Sanders Museum) was… a KFC. Nice to get some different flavor an entire ocean away, right? And of course, it’s not exactly an accurate representation of our fine community to the rest of the world.

With its rich agricultural and trading history, high immigrant population, and an increasingly-trendy urban core attracting the creative class, Louisville’s food scene is formidable and category-defying. It’s also completely misunderstood by outsiders… including, and especially, the media. You know, the parachute journalists, descending into town to build a quick top-10 list around Derby or Forecastle. The Brooklyn-based bloggers who throw Garage Bar — the joint that sells $16 pizza on a water cracker — on their “Best Dive Bars” list (not to cast the first stone as I’ve ruminated on myriad topics I know nothing about for quick freelance cash, but I at least feign some cursory research). The West Coast travel writers ready to tick off some items from their Fodor’s list and try some exotic goddamn sorghum.

And when it comes to covering Louisville dining, these ding-dongs push two general, pretty lazy narratives. The first involves forcing the expectation — presumably assigned by their editor, or placating a publicist’s request, and then developing some value judgment therein. The second is that East Market and downtown are essentially the only neighborhoods with great food.

Both stories are a real snooze.

The aforementioned clickbait-generator and meaningless award-farm Thrillist came up tough on both counts in its recent “Best Food City in Every State” feature. “The ever-changing Louisville is so much more than bourbon and fried chicken,” writes Meredith Neil, gunning for the deep-cut, “no shit” lede before joining the queue of blurbs lavishing usual suspects like Proof on Main with additional repute. She recommends Shirley Mae’s for that fried chicken, and while that place is a great choice and an absolute gem, Saveur, Food & Wine, Food Network, and heck, even SB Nation all very recently staked their editorial claim there. The ribs are the move at Shirley’s anyway, and why no love for Indi’s? That one didn’t show up in Google?

Speaking of Food & Wine, Josh Stein’s piece “Hunting for Local Distinction in Louisville” cobbled together Saveur’s city guide and The New York Times’ “36 Hours” feature to concoct a perfect Frankenstein monster of the same hot spots the hotel concierge recommends (you can probably guess without looking). Perhaps it’s actually the concierge service that sets the press’ agenda, at least when writers aren’t Googling each others’ work — they might be the most important force in travel journalism! Anyway, the feature itself is compelling, and I certainly appreciate any critique of Butchertown Grocery — every food writer treats them like Dear Leader, so any dissent toward the People’s Democratic Republic of BuGro is welcome — but the central theme still fulfills the first clichéd narrative. The author argued that Louisville doesn’t project a real culinary identity, while anticipating some intangible, geographically unique experience. Well, yeah dude, Decca’s concept and environment is a deliberate attempt to replicate a Bay Area dining experience. You could argue a few of Louisville’s most-covered eateries adopt a similar approach. Meanwhile, Eiderdown embraces the fabric of its traditional, German-immigrant neighborhood with staples from the motherland, alongside celebrations of Louisville’s history as a major pork producer, and even retooled its menu this year to respect the wallets of a neighborhood not fully gentrified. Yet. The plates are incredible, the concept focused and the heritage fully ingrained, and it’s still owned and operated by real townies — what’s more authentically Louisville than that?

Someone should notify the concierge.

As for the rest of the media corral, their vocabulary around Louisville remains stunted — GQ, CNN, Garden & Gun, USA Today and more all swarm around the same dozen businesses. And while these restaurants are very good, given people’s misconceptions about this part of the country already, one might think Louisville houses only three or four blocks of restaurants vis-à-vis press clippings of the past five years. All with the same headlines too. “Louisville is more than just bluegrass music, bourbon and fried chicken,” wrote Irvin Lin of Eat the Love. “There’s more to Louisville than horse racing and bourbon,” wrote The New York Times’ Elaine Glusac in the nation’s paper of record. “The Kentucky city’s offbeat cultural attractions go far beyond bourbon and the Derby,” proclaims The Village Voice. I’m sure our alt-weekly brethren would take issue with a piece on NYC that leads with “The Big Apple is more that just chewy bagels and ‘ay I’m waaawkiin’ ‘ere!’” Not that it’s fair to compare the country’s economic powerhouse with anywhere else, but cities are living creatures, and like other humans, we tend to reduce everyone to generalizations. How Nashville is more than country. Like Indianapolis is more than racing. And Austin is more than tech bros gentrifying all the fuckin’ tacos.

So what is the proper representation of Louisville cuisine? The city has long grappled with its identity, everything from its Midwestern with Southern flourishes regionalism to proper pronunciation. It amalgamates disparate characteristics that work, much like Dragon King’s Daughter’s sushi tacos with craft beer concept. It’s a must-visit when entertaining out-of-town guests, and wholly original. And while Wagner’s version of a Denny’s-in-a-pharmacy gets all the press, Morris Deli’s lunch-counter-in-a-liquor-store offers better and more eclectic fare, whether you want good Southern barbecue or a New York-style Reuben. For an elevated version of the blue-plate lunch, marrying the city’s old blue collar identity with its younger hipper trajectory, Gralehaus’ chef-driven comfort food is the perfect fusion. Even Guy Fieri loves the house-made bologna sandwich that’s appropriate to eat with white gloves.

Chances are Louisville’s smörgåsbord will satisfy whatever you’re craving. Late night drunk grub? New Wave Burritos will meet you at whichever Germantown watering hole you find yourself. Authentic Peruvian charcoal chicken? Yummy Pollo’s got you covered. Killer small plates? Wiltshire on Market, which, despite sitting in the middle of journalists’ favorite destination, doesn’t seem to get a lot of external editorial love (perhaps it needs a hotshot publicist, or at least some TripAdvisor stickers in the window?). Lydia House serves up inspired homemade brunch in a cozy home with a backyard putt-putt course, while the industrial-chic Mirin ladles made-to-order authentic ramen in hand-thrown bowls inside a steely urbane environment. Vietnamese, Asian Barbecue, all American Barbecues, Ethiopian, “New American” (whatever that is), Mediterranean, Irish, Bosnian, Surf and Turf… whatever your pleasure, this city satisfies. You just wouldn’t know it reading the glossy magazines, since list makers are unreliable and food writers are lazy. Consulting the local papers, here and elsewhere, will hip you to authentic and more unique experiences than Food & Wine.