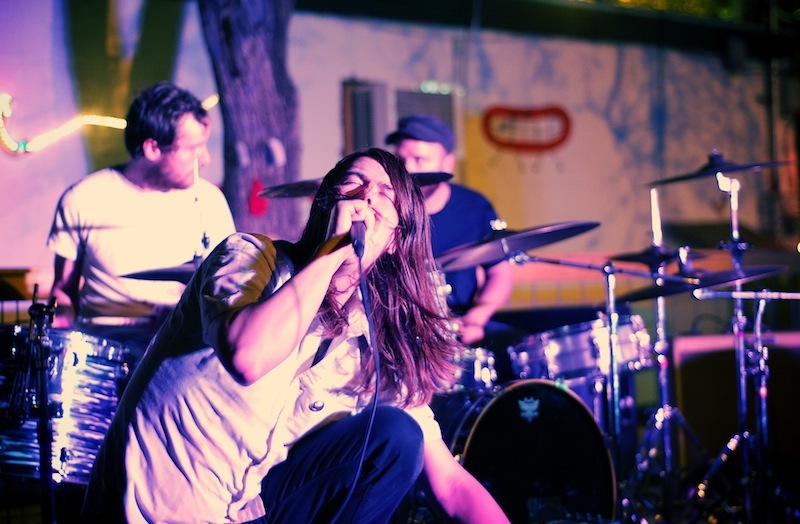 After spreading the gospel within the Rhinoceropolis DIY scene of their native Denver, Woodsman unleashed a steady torrent of brain burning 7”s and cassettes throughout last year with the help of trusted sources like Mexican Summer and Lefse. On their new full length, Rare Forms, Woodsman takes full advantage of one of Germany’s finest exports – the mechanical apache beat. However, the band also conveys, perhaps paradoxically, a thick bucolic vibe. Warm guitar tones, distant melodies, grainy feedback loops, and the visceral healing power of shamanistic drumming work in tandem to evoke panoramic landscapes and mystical milieus. Such imagery would be evident even if the band hadn’t adopted a pastoral namesake. I recently chatted with the guys via speaker phone about their prolific week at South By Southwest, their Fire Talk label, nature, UFOs, and never getting comfortable.

How did Woodsman form, and does the name hold any significance?

Trevor: Eston and I had the name in 2006 when we were working in a more ambient realm for our first EP. I was living here in Denver and he was in Minneapolis, sending tracks back and forth. We kicked around names for a while, and Woodsman stuck. All the names were definitely forest-themed. I was living in the mountains so I was having a really nature-enriched experience. I moved to Denver for film school, and Mark and I met on the first day. We found out we both played music and both were in two-person bands. He was in a band with Dylan called Hand, and I was with Eston. We ended up booking a show together and I just asked the other two to join us. It was improv heavy back then.

Dylan: That’s how we ended up with two drummers and two guitar players, since we were doing that in a split up format before.

Trevor: Yeah, we’re not against bass players. It’s just how it all folded together.

AZ: In your bio, you describe the rhythm section as “totemic percussionists.” Obviously that intrigues me.

Dylan: I’m intrigued too. A friend of ours wrote that, and I told him to just go as crazy as he wanted. I think it relates to tribal drumming patterns, which we do.

AZ: The definition reads “a belief system in which humans have a kinship or mystical relationship with a spirit-being, such as an animal or plant.”

Tevor: That makes a lot of sense. I think he was tuned into something only our music could do [laughs]. Denver is like this little metropolis surrounded by mountains and nature. It’s this whole dichotomy. The way everyone lives their lives, it’s symbiotic with the modern world and nature. The mystical thing makes sense too, being here in the southwest, with all the mystical overtones.

AZ: Like the airport being built on Indian burial grounds?

Trevor: And underneath it’s a hub for any UFOs and alternate beings that come to America. They’re filtered through our airport. It’s like customs for aliens. [laughs]

AZ: Speaking of the southwest, last time we spoke, you said you played nine shows at South By Southwest.

Trevor: It ended up being 12. We had to bail on two, though.

AZ:  I think it was Black Lips that set the precedent for playing shows until you collapse.

Dylan: Yeah, but it was really fun that way. The year before we played three, and only two were in Austin proper. It was more hanging out and we realized we’d rather just be playing that whole time.

AZ: Do you feel Woodsman achieved what you all set out to do there?

Trevor: For us, it was just about sharing our music. We didn’t go in with any real expectations. We mostly played shows with friends and people we knew. You’re calling us now, so that seems like it came out of that. This year people actually came out and watched us, which is fucking rad.

Eston: At the Denver showcase, there were people we didn’t even know, so it was awesome to turn them on in Austin.

Trevor: Yeah, we mostly play house shows and warehouse shows in Denver so it was great to play to wider crowds. It seems like it’s harder to get in front of people if you’re not playing catchy pop music.

AZ: Yeah, but I think there’s a lot of great hooks on Rare Forms.

Trevor: Right, but that record isn’t indicative of what we do live as a band or what we’re doing now. We’re constantly moving. I think all of us grew up listening to bands who put out 15 records in their careers, and you might stumble onto a band eight records in and look back and forward and see how they progress. That’s how we look at this band. We try to keep moving and not be too comfortable with what [we’re] doing at any time.

AZ: Rare Forms seems evenly split between the ambient and more structured. Is it harder to write a song with a great hook, or an avant piece that’s interesting?

Mark: It was a new undertaking to write these shorter songs for us. We wanted to try something new and this almost split personality on the album is what that became. That is why it has the title Rare Forms. We always record what is coming naturally to us at the time and we noticed that there was this paradox we could capture, a dark dissonance versus a lighter weightlessness

AZ: Did your Fire Talk label come about before the band or because of it?

Trevor: We went on tour and before we had anything out in the world and didn’t know what we were doing. We made a CD-R and put a label name on it. We were hanging out at this campfire outside this bar, and Fire Talk became the name. One of my friends from Pacific Pride said ‘hey you’ve got that label logo, can I put that on the back of my CD?.’ ‘Yeah man, go for it.’ That’s how it started…. our friends using a logo we drew on a Netflix envelope.

AZ: I think a lot of the comparisons you’ve gotten so far aren’t accurate, so I’d love to hear what artists, or art in general, informs Woodsman.

Mark and I are really into Stan Brakhage. He’s a sort of well-known art ghost in Colorado and did a lot of awesome experimental film work. The way he composes a film is how we compose music, which is collage style but with a definite form. Dylan, you wanna talk about Miles Davis?

Dylan: [laughs] I dunno, it comes from all different places. We get the krautrock title a lot, which is accurate in certain ways. We listen to so much of the old German stuff. Can, Amon Duul II, Faust…

Trevor: Yeah that’s all our common ground. What we really connect on is anything exploratory. Boredoms is a huge one for us. Vision Creation Newsun is one of my favorite records of all time.

AZ: For sure. You guys just need eight more drummers.

Dylan: We’ve actually talked about that.