Bicycling in Louisville in 2016 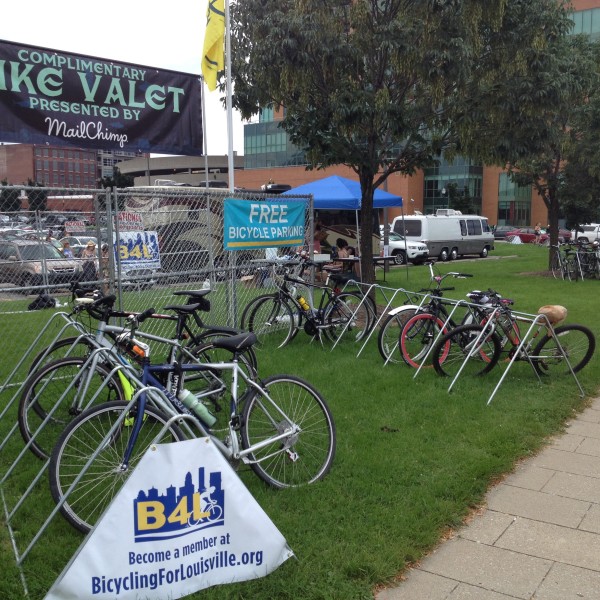 If you ever needed proof positive that those lists you see shared around Facebook are completely bunk, USA Today’s 10 Best Bike-Friendly Cities is a good one. They list Louisville – a city that’s gettin’ there in terms of bike-forward attitudes but sure as heck ain’t there yet – among name brand two-wheeled powerhouses like Portland and flat-as-a-pancake Minneapolis (not to mention citing sources I’ve never heard of like “Louisville Cycling” instead of respected advocacy groups like Bicycling For Louisville).

Louisville is not a model bike friendly city, at least not yet. But it can be, and if Mayor Greg Fischer stays in office a while longer, it’s a great possibility! The aforementioned B4L recently published this astonishing animated map that shows the growth of the city’s bike infrastructure over the course of just three years. While he might have the stage charisma of a tree burl in public speaking engagements, Mayor Fischer has proven time and time again that he gets it done when it comes to bicycle advocacy and public health. I mean, witness this thing below… it’s impressive:

The new bike infrastructure initiatives have proven truly phenomenal and tide-turning for the city – new buffered lanes in the urban core, the extremely popular pedestrian and bicycle-exclusive Big Four Bridge, the forthcoming 100-mile bicycle ring road Louisville Loop. However, with the changing cityscape, I wish we would see more access to comprehensive bicycling education throughout Jefferson County. To wit, I love seeing so many new folks on bikes, but these dudes riding the wrong way down the street, with headphones piped in and no helmet often on the sidewalk, need to knock that off right now. I get aggravated at a motorist not sharing the road properly, but I vehemently hate a biker who makes us all look like lawless buffoons. And undoubtedly that’s the result of rapid change in the thread of urban transport, like Louisville’s aggressive expansion of bicycle lanes, without an educational component to help people in the community understand how it works.

In fact, while The League of American Bicyclists recently upgraded Louisville’s bikefriendliness to silver status, the study revealed serious deficits in education and total road coverage compared to other silver cities. To the latter point, the expansion of dedicated bike lanes, not just sharrows, continues on an upward tick as evidenced by B4L’s map. We’re beginning to enjoy real, tangible infrastructure and the tools necessary to encourage people to choose a bike as transportation. But that all comes without any strategic campaign to teach people how to use these tools. This needs to change.

Kick off a campaign in schools and community organizations and allow them to propagate out through various PSAs and advertisements. Make the campaign as ubiquitous as possible in the urban core, like the #LouisvilleLove campaign throughout 2014 and 2015 which, while clever, we don’t need. Louisville loves itself plenty. Take a note from those type of civic pride drives, and some of the monies available for public health initiatives plus whatever B4L can raise, to develop an easy-to-use, mobile friendly one-stop-shop website. Make it easy to find answers to questions about best bicycling practices, how to properly adjust your helmet, general safety, and most importantly, the Kentucky Revised Statutes. A bicycle has the rights and responsibilities of a slow moving vehicle. Ergo, a bicyclist can ride in the right-most lane without any bullshit from motorists. Conversely, a car cannot hop up on the sidewalk. Nor should you. Stay in the road. Use your turn signal, also known as your arms. Travel in the same direction as street traffic. Those are laws. That all might seem conspicuous to the seasoned biker, but to the general populous it’s not. And if the biking community wants advocates (and we should), they must be inclusive to all – something this community sucks at. (I’ll have more thoughts on that point in a later piece, but rest assured if you’re a weekend warrior who suits up in spandex to show everyone a thing or two on the Cherokee Park scenic loop, you’re gonna get put on blast).

And of course there’s the hairier, more gray issues. When does a bicyclist stop at a stop sign, and when is it OK to blow through? What’s the modus operandi for traffic signals? Best practices get blurred here and rely on the discretion of the rider. That’s an important discussion to have between new and seasoned bikers, as well as non-bikers. The takeaway though should be that bicycling does not grant one carte blanche to whiz about urban streets without a care. It’s dangerous to the individual and does not win allies in the battle for more bike-filled streets. Of course, I believe these type of cyclists aren’t discourteous as much as uninformed. And it’s also my belief that motorists will show bicyclists the respect they deserve if the biking community steps up and makes sure all of us show respect for the road.

OK, I’ve harped on fellow riders here, but obviously motorists exhibit attitudes toggling between “jerk” and “real sonofabitch.” So beyond education and teaching motorists not to drive in the dang bike lane, how awesome would it be to actually humanize bicyclists toward the public? A bicyclist isn’t just some obstacle discouraging you from going 40 in a 25. They may be environmental stewards, or simply dislike driving (I’m a little bit of both). Perhaps they lost their ability to drive, or simply want to save money. Perhaps their reasoning doesn’t fit neatly into a box. Regardless, there are many compelling reasons to ditch the car for a bike that should appeal to a vast swath of people. And though this trend continues to grow in Louisville, take a gander at any given article on WDRB or The Courier-Journal about the bike lane expansions and behold a vitriol that would make the Old Testament blush. It honestly scares me at times (even though I’ll still troll these turkeys). To that end, Bike Pittsburgh runs an absolutely awesome PSA campaign that adds a human element to riders most motorists don’t encounter. I love these ads. 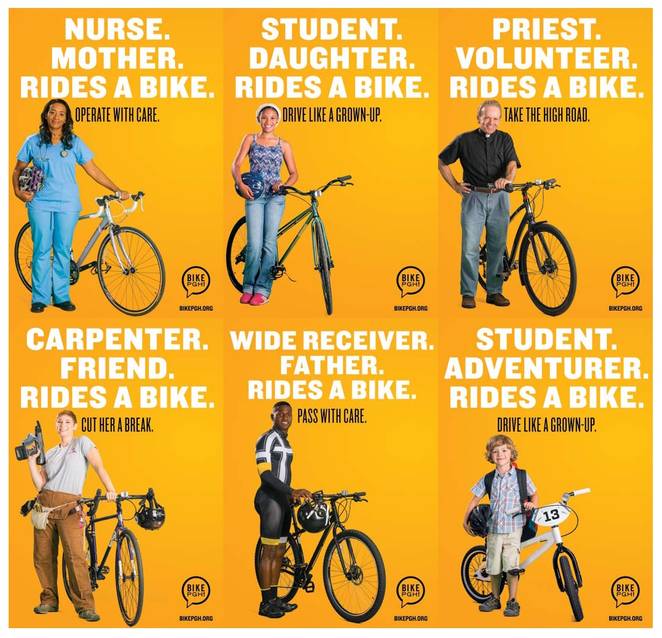 I seriously applaud the work B4L has accomplished pushing for reform and increasing the visibility of bicycling as a more ethical, healthy, and economical option for transportation, as well as Mayor Fischer’s continued push of retrofitting streets in the urban core for all. But I hope to see a more comprehensive, thoughtful focus on education in the future so these efforts are not all for naught. Without education, you see the type of frustrations among both riders and motorists rampant in Louisville today. I also hope to see more inclusion in the bicycling community toward curious new riders too.

An aside: I totally understand I have certain privileges that allow me to choose bicycling as a transportation, and as such, vow to never proselytize. Some bicyclists suck at this. That, too, needs the kibosh.