LEO Weekly: Grievances Against The Clown 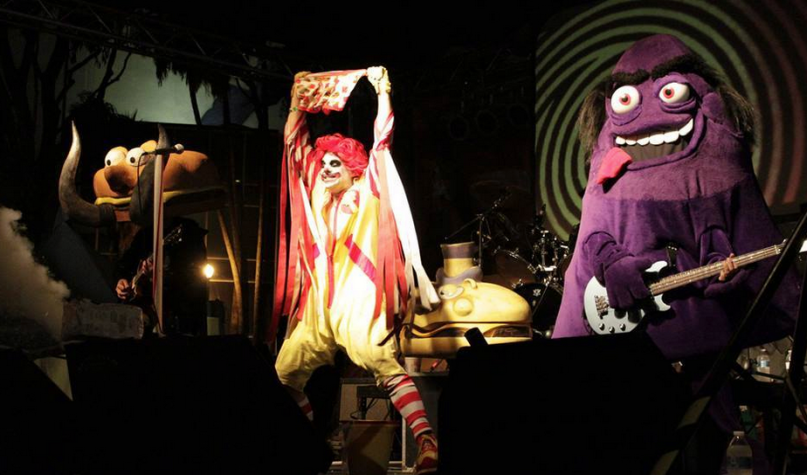 It almost makes sense that McDonaldland and heavy metal finally amalgamated into one form, equally grotesque and beautiful. Both worlds come steeped in fantasy, replete with heroes and villains doing battle in resplendent imaginary vistas. Both ignite that child-like node in the brain that evokes unadulterated awesomeness — guitar solos are awesome, as are ball pits and the Shamrock Shake. Draw your own parallels, and no matter what you come up with, Mac Sabbath — a Los Angeles-based, M********s-themed Black Sabbath tribute band — has taken it to its logical end.

But Mac Sabbath is not just a cover band with a gimmick, as dismissive naysayers who hate fun claim. They’ve come to issue a very important message — one that keeps its potency as more and more information is, ahem, injected into the public consciousness on the truth about GMOs, preservatives and factory farms. The costumes they don, all of which resemble a form of McDonaldland characters after a couple passthroughs of Seth Brundle’s telepods, and their complete thematic and lyrical reimagining of Black Sabbath songs for the fast food nation act as a protest — a high decibel satire — for grievances against The Clown. Mac Sabbath are not lovin’ it, and they just might be the perfect protest music against the dystopian pre-packaged pseudo food that dominates the conversation about national nutrition. If the world is just, Michelle Obama will invite them to perform at the White House.

Mac Sabbath’s members remain anonymous outside solid pseudonyms like “Slayer McCheese” and speak through their manager Mike Odd, whose job it is to not only act as the band’s mouthpiece, but also, in his own words, “keep society safe from the clown and keep the clown safe from technology.” The clown, of course, is bandleader Ronald Osbourne, a time-traveling soothsayer from the “innocent” ‘70s bent on saving us from our over-iodized selves.

I spoke with Odd about the origins and ethos of Mac Sabbath, and hopefully helped prepare the kings of drive-thru metal for a city who celebrates the slow food movement, before their show at Zanzabar on Saturday, September 5.  And as I learned, do not, for legal reasons, let us mutter the M-word.

That seemed better [laughs]. Maintaining mystery, that whole thing, being a kid and into KISS and not really knowing who they were. Sometimes the mystery was way better than the oversaturated reality shit that we have going on.

It’s disappointing when you actually see Gene Simmons and his weird helmet hair thing he’s got going on and it turns out he doesn’t really rock and is totally a doofus.

Yeah, that’s exactly what I was going to say. Entertainment should, I think, be about fantasy, and not more of the reality as entertainment. More “Who Killed Mr. Moonlight?” shit, ya know what I mean.

How was Mac Sabbath conceived?

Well, it was all the brainchild of this Ronald Osbourne character. He informed us that he traveled here through the space-time continuum from the 1970s and a land he describes as some enchanted forest where “hamburgers grow on trees” kind of thing. And his whole thing is to send this message from the ’70s before the time when food went bad and was controlled by tyrannical governments and Monsanto. That’s what all the lyrics are about … GMOs, Monsanto, and how things are going [in general], this whole very Orwellian world. 1984 has come and gone and we didn’t notice. We’re all worried about this 666 shit we’re gonna get and the government’s gonna track us or whatever, but instead of them installing these things in us, we went out and bought them and pay for ’em.

So is it safe to say Mac Sabbath is a protest band?

I never heard it worded in that way, but that sounds good. [Ronald’s] no Bob Dylan though. I’ll tell ya that.

I mean, I dig this whole lineage … we’ve gone from Woodie Guthrie to like Gil Scott Herron and now Mac Sabbath.

Yeah, I think so too!

The only peer I can think of [to Mac Sabbath] is the Pizza Underground. Be they friend or foe?

Wow [laughs]. I don’t like talking about this, man! I don’t even consider them to be honest [laughs].

Sure, those guys can’t even manipulate the wrinkle in space-time that Ronald Osbourne was able to do.

The Pizza Underground doesn’t have a lot of things! The one thing the two bands have in common is Macs, and that’s about it.

Let’s make sure Brooklyn Vegan doesn’t see this. Then you’ll get some TMZ headline that’s like “Mac Sabbath throws beef, pun intended, at the Pizza Underground.”

[laughs] We’re good, we’ve already been on there once for something.

The new one, of course, because I think it’s natural to be most excited about the new. The newest one is “Zipping up the Uniform,” which is a take on “Symptom of the Universe.” “Zipping up the Uniform” is awesome because it’s a whole new subject matter that we haven’t tackled before. We’re usually singing about the plight of trying to eat in today’s society and how the government is poisoning us and stuff like that – real sarcastic stuff. But this one is more about the plight of the fast food working kind, ya know, clocking in and being chained to the fryer and sticking it to his jerk boss. I guess that’s our other form of protest song you could say [laughs].

Right, and that’s great. It’s not just songs about food, but the experience of food and the people who work in it. The whole culture around it. Not just Weird Al writing songs about food, no disrespect to his amazing food songs, of course.

Has anyone from Black Sabbath or M********s reached out to you all?

We don’t say the M-word! But Black Sabbath, on January 1, reposted the “Frying Pan” on their Facebook and Twitter, and that now has, I think, over three quarters of a million views, I think. They’re supporters, man — they’re diggin’ it!

When the event was announced, there was a lot of excitement but you also saw a lot of these punks “from the scene, man” who wanted to get their opinion out there, saying, “This is just a tribute band with a gimmick. Why don’t you all support the real bands?” or whatever. How would you address that?