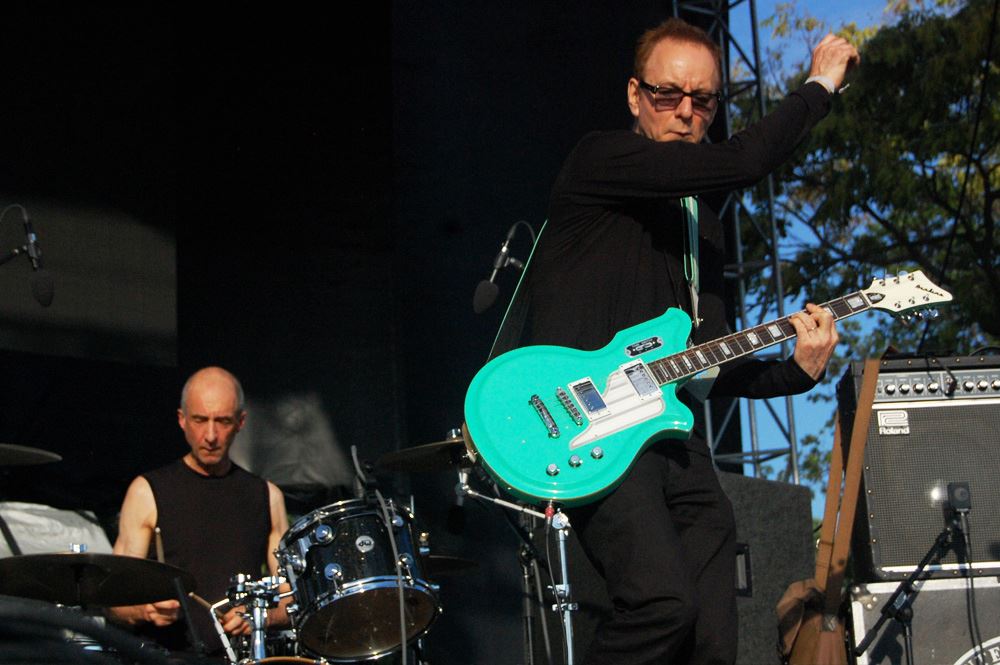 Too punk for the art kids and too art for the punk kids, Wire never fit neatly into a box. Formed in London in 1976, the group released a trifecta of perfect albums – the seminal debut Pink Flag, 1978’s Chairs Missing, and the perfectly eclectic 154 the next year – before taking a sabbatical to pursue other projects. Early adopters of synthesizers within the RnR paradigm, Wire eschewed their snaky, steely art rock roots for a more brazen electronic approach upon their late ’80s reboot, going so far as to tour with tribute band The Ex-Lion Tamers (a Pink Flag reference) to perform audience-satisfying vintage material as a warm up set.

Wire v3.0 barreled through the early aughts with the muscular, industrial-informed Read & Burn EPs series that gave bands half their age somethin’ to think about before vocalist Colin Newman, bassist Graham Lewis, and drummer Robert Grey expanded their sonic palette with the same vigor and craftsmanship as Wire’s celebrated early catalog with an astounding and artistically-rich run of self-released LPs. They even reworked some of their more confrontational, Dadaist older material within a dream pop prism for 2013’s Change Becomes Us. Wire makes their second stop in as many years to Louisville as part of a select few U.S. dates in support of their latest and totally excellent new effort, self-titled because after almost 40 years, why not.

LEO chatted with Newman by phone about not looking back, experimentation, and that pesky punk label.

I was fascinated how the album starts out with “Blogging” because a lot of Wire songs seem to have an introspective or vague quality to them, yet “Blogging” references these very specific and ephemeral tech buzzwords in this absurd way. Is this the Wire sense of humor coming out of the gate that this album embraces?

Well, yes and no. We chose it as opener because the way it starts, the way the band kicks in, it feels like the start of a journey. I feel like it opens the album up to people. The thing with Wire is that you shouldn’t get it with one listen. It’s interesting to see how fans on, say, our forum (pinkflag.com) have reacted and interpreted these songs. Some tracks are more obvious than others.

I read recently that Octopus is based off Paul the Octopus. Considering that and the lyrics of “Blogging,” it seems Wire wants to address current issues head on. Is that accurate, and if so, did you set out to make a statement-based album?

To the last question, no. Graham wrote the lyrics to “Blogging” and I wrote “Octopus,” which is just a passing reference [in the lyrics]. The song’s really about the idea of people co-opting somebody else’s fame or work or even their belongings by nefarious means. Paul is just a funny reference. The World Cup is a big celebration not just for the country but the entire continent, and for everyone talking about some octopus in the tank in Germany that somehow can predict two score, it’s like ‘yeah, they’re getting all that attention, we want some as well.’ It’s like streakers. In the same way, there’s people out there trying leech your computer or your bank account. If you’ve got something, someone is trying to grab it.

I remember when email first started, you’d have conversations and keep in touch with people. Now all you need to know with email is spam filters, you get so much shit. And even something kind of simple like Twitter is full of trolls. It’s kinda depressing to have democracy and equal access [of the internet] and to have some people say ‘I’m gonna just piss on it for everyone else.’ It’s a depressing side of human nature.

Speaking to that, for me Wire feels like an angry album, even though a lot of fans seem to extrapolate a more happy, poppy feeling from the record, thinking about the dreamier sound of Red Barked Tree and even parts of Change Becomes Us. There’s some punch to Wire, lyrically or musically with “Harpooned,” that feels like its informed by the difficulty of living in the modern world. And trolls.

That’s an interesting viewpoint. I would say it’s more extreme musically in that, it has… it’s not just one end of the spectrum, not that Wire goes sludgecore [laughs]. What makes it good for us is that there’s not one thing we do, or one type of song [we write]. You have a song “Sleep-Walking” about a pretty disturbing British political situation, but at the same time you have “Burning Bridges,” there’s nothing in there that isn’t quite a typical love song. I like the diversity of this record.

We started work in pieces and we had a lot of material for this record. It was quite difficult to get down to the final tracks, and we knew we wanted to do a single record since [the self-released] Change Becomes Us as a double vinyl cost a fortune. The decision on which tracks ended up on [Wire] really came down to a band aesthetic. Graham [Lewis] likes to keep his writing open. It’s a fascinating idea that while you think it’s angry, some people find it’s softer. I certainly don’t think it’s softer though.

On labels, I feel like you reject punk label a bit.

[laughs] A lot. But that’s also a generational thing. Being exactly the age we are and going through the mid ’70s in real time, a punk band didn’t look like us and didn’t sound like us. We were quite specifically hated by the punks, as it were in Britain in 1977. We were too weird, too smart – in both senses of the word – we didn’t try to look like a punk group. It just so happened we were going on at the same time and in some ways we kinda invented post-punk in the middle of punk because we were already not punk, not that anyone had a concept of [that label] in the late ’70s.

Except post punk wasn’t even a word until the ’90s.

Exactly. And I don’t think it’s a category that has that much meaning. It’s like saying post-pop or post-rock, which became certain American groups in the ’90s. I think all musicians hate that sort of classification. What information does that tell you? It doesn’t mean anything emotionally. I don’t think I know what post-punk is, or if someone likes it.

I think it means fast-ish songs but there’s synths involved.

[laughs] Hey! You got it! But that could be anything too.

A lot of bands who’ve been around as long as Wire has relish in their zenith periods, but you all don’t – rarely playing material from [the first three records], it’s mostly the new songs. To me though, the new songs are just as exuberant as the old. How does Wire stay fresh and forward thinking?

It goes to the old Graham Lewis joke, or heckle, that goes “play what made you famous!” Entertainers play whatever made them famous, because that’s what they do – entertainers entertain. They do whatever they need to do to please the audience. Wire has always been an art project, from our perspective, so it’s our viewpoint that Wire gets to do new things. And there’s a combination of natural evolution, which goes on anyway, and curiosity of what if we took this approach. We are disinterested in being one of those heritage groups. It’s a huge trap. But [those bands] are also not interested in making new records, which is a gamble to make work, so therefore they will just play it safe. So they’ll tour around on the classic album, make a bit of money, and then go back to doing whatever they were doing, which is probably not much. It’s artistically a terrible decision. It’s a one way ticket. I think it’s rather depressing really. Of course, [some of these bands] can charge lot of money and people will come see them so they don’t really care. We’re not in a situation where we can make a lot of money and it goes against our instinct – we don’t want to do it, it’s not a lot of fun, even though it’s hard work to get the band to agree on how to move forward, it’s never boring.

[laughs] Well that’d be another one way ticket, to oblivion!  Wire plays