LEO Weekly: Looneyville – The News of 2015 in Review 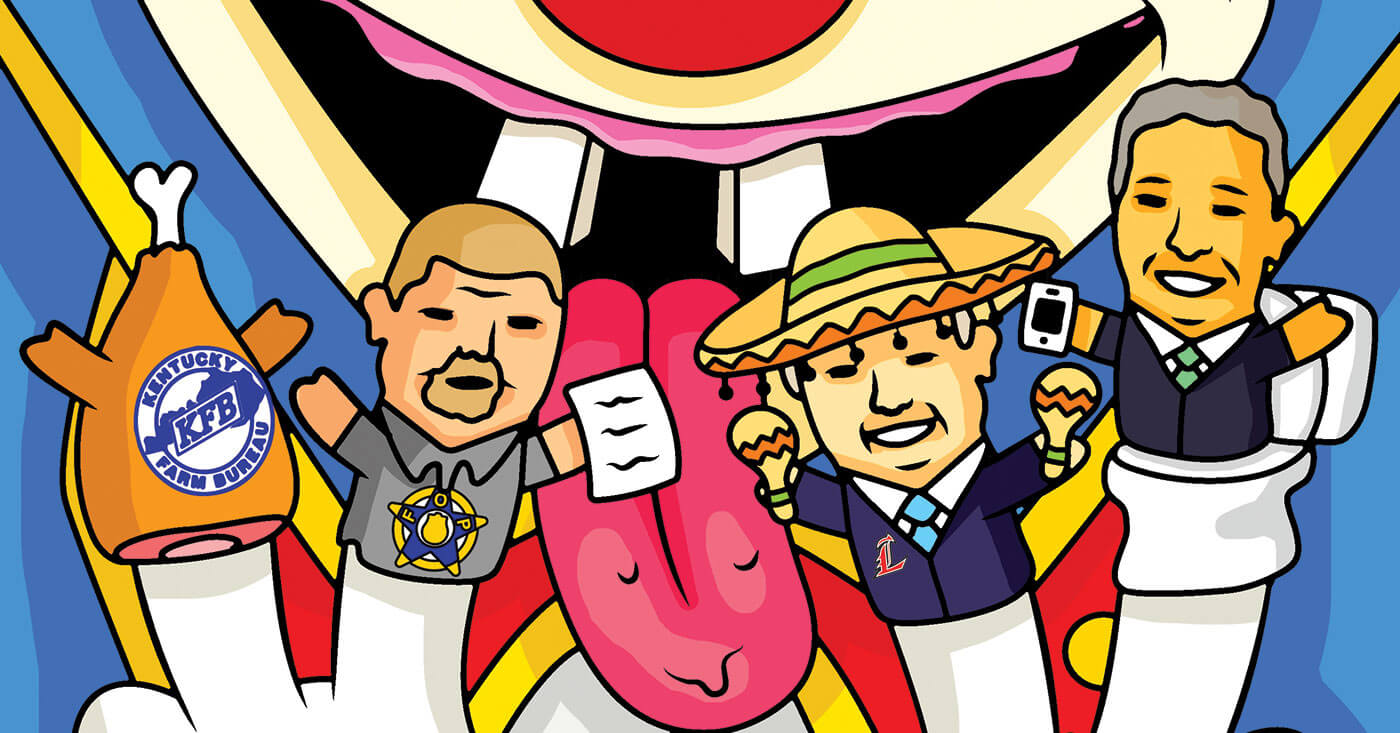 In every respectable poll, even up to the last week in October, Democrat Jack Conway held a comfortable, outside-the-margin-of-error lead. According to random samples and tried-and-true statistics, the reincarnation of Buzz Lightyear as an attorney general should’ve comfortably cruised to the governorship on Nov. 3.

Then a funny thing happened on the way to the polling place (and if that’s in Jefferson County, you still don’t get an “I Voted” sticker, which should be treated as a war crime). Voting returns came in swiftly from deeply blue Louisville, showing Conway with only a slim lead. That’s very bad if you’re a Democrat. And when the rest of the state returns came through, Republican Matt “For-Whom-the-Bells-Toll” Bevin had thoroughly given Conway the business to the tune of nine points. Brutal.

Bevin ran on a platform that included dismantling the state’s healthcare exchange, often cited as one of the best implementations of the ACA in the nation, and cutting Medicaid expansion in a state with areas of extreme poverty.

And with that, columnists and pundits cried that Kentucky voters voted against their own self-interest. In fact, they did not. First, it’s not that Kentucky voted against its interests — it didn’t vote. An off-year election, only 30 percent of registered voters bothered to show up. More important, The New York Times recently discovered a startling trend of voter apathy among the nation’s poorest, which certainly includes eastern Kentucky, and in places with abject poverty; it’s usually those doing a little better who participate in the voting process. “The people in these communities who are voting Republican in larger proportions are those who are a notch or two up the economic ladder,” wrote Alec MacGillis on Nov. 20. “And their growing allegiance to the Republicans is, in part, a reaction against what they perceive, among those below them on the economic ladder, as a growing dependency on the safety net, the most visible manifestation of downward mobility in their declining towns.”

For the 30 percent that did vote on Election Day, it’s a bit of a condescending assertion to claim these citizens voted against their interests. They exercised agency and their democratic rights just fine, and, right or wrong, they chose the scorched earth,  “fuck yo’ couch” approach, a strategy the entire nation ran with in 2004. Of course, voters are easily manipulated — Kentuckians overwhelmingly approve of Kynect over Obamacare even though they are the same thing — but they voted their conscious nonetheless.

Matt Bevin framed himself as an outsider successfully, which resonated with the voting bloc that votes in every election, not just presidential or Senate years  (a bloc that decidedly skews older and whiter). His election served as an indictment of Frankfort, and in some ways, a final heave ho to Obama and the political process in general — one that plays well into the narrative of the cowboyization of GOP candidates. And as an outsider with Republicans and despised by the Dems, Bevin has absolutely no incentive to give a shit. Some Frankfort politicos believe he will live up to this prophecy.

The takeaway for Democrats is, of course, to run a candidate that engenders some sort of interest or passion in their voting base. Conway’s neutral rhetoric, ideological flip-flopping, and being as charismatic as a tree burl did the party no favors. At least in 2016, Kentucky Democrats have a common enemy and clear purpose by which to mobilize the base.

The curious case of Cahoots

The end of Cahoots is nigh, most likely. The high-profile, embattled Bardstown Road watering hole had its liquor license suspended in October — the shot of death for any bar — after a series of public controversies saw them labeled a “public nuisance” by authorities.

No one knows exactly when Cahoots became considered a hive of scum and villainy. Housed in the former Tewligans, it carried the torch as a home for the punk community in a familiar divey atmosphere. Louisville Hardcore’s wiki entry on Cahoots states, “If the Mag Bar is Louisville’s punk Valhalla, then Cahoots is Louisville’s Hel.” To wit, this type of chatter permeating local lore of drug trafficking and general unsavory behavior for years eventually culminated in a 2014 police raid. Compounding matters, Phoenix Hill Tavern closed over the summer and bequeathed its runoff of those about to get turnt. A World Star-worthy video of a late night street brawl (that involved citizen tazing!) in August went viral and local media sicked their dogs to 1047 Bardstown Road. The video was titled “Cahoots Fun,” but the bar and their attorney claimed the video didn’t even take place there. That wasn’t enough to convince the neighborhood or law enforcement, citing this breakdown in social order as simply the latest in a string of skirmishes.

However, the reaction to the escalation of Cahoots’, we’ll say, “whackier” moments is the more interesting story. On social media and in conversation, the city watched as the generally progressive,  but decidedly white, 40204 exercised a little mental acrobatics in trying not to sound racist while also being totally fucking racist (a large number of the former Phoenix Hill-cum-Cahoots patrons were African-American). While incidents of violence and disorder did increase over the summer, how much of it had to do with increased numbers versus something environmentally unique about Cahoots is anyone’s guess.

The truth is, many bars are often the epicenter of less-than-dinner-table-appropriate behavior. Cahoots was simply much more overt about it. Last month, The Courier-Journal discovered St. Matthews area bars like Tin Roof and Diamonds, and even neighboring joints like Baxter 942 and Nowhere Bar see a similar or greater number of police calls and criminal activity. So it’s possible if Cahoots’ location and clientele were different, this might be a totally different story. Regardless, the Cherokee Triangle neighborhood of The Highlands got its nice quiet community back, save for, you know, the large strip of loud bawdy lawlessness along Baxter Avenue.