VICE: Is This Indiana Civil Rights Lawyer the Great Progressive Hope of 2018? 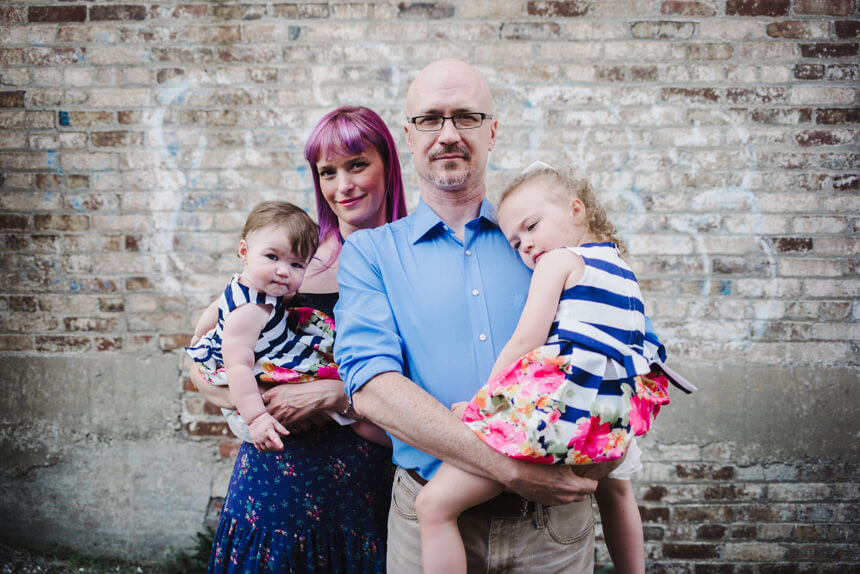 Dan Canon is suing Trump, calling out white supremacy, and running for Congress. But can he win?

Less than a day after announcing his campaign for Congress in the parking lot of a brewery near his New Albany, Indiana, home, Dan Canon stood on a bench on a well-trafficked pedestrian bridge over the Ohio River telling anyone who would listen why they deserved healthcare. Some kept walking, some stopped to join in the growing circle around him.

“Healthcare is your right, and you have to assert that right. You get a small group of people that believe that and it spreads. If we tell our elected representatives we [have that right], well, they’re not doing their jobs,” he told them in his role as a political busker. “So what do you do? You fire them!”

That’s the sort of personalized campaign Canon is running to flip Indiana’s Ninth District from red to blue. The progressive civil rights attorney is one of the most fascinating midterm House candidates in the country, a longtime advocate for causes ranging from gay marriage to immigration to cannabis who spends his free time acting in community theater, playing in bands, and marching in protests. If he can get into Congress, it’ll be proof for a lot of leftists that yes, their preferred candidates really can win.

He has his work cut out for him: In 2016 Donald Trump won the district by 27 points and Republican Congressman Trey Hollingsworth beat his Democratic opponent by 14 after moving from Tennessee in 2015. But with the prospect of a nationwide “blue wave” coming in this year’s midterm elections, Canon could actually win. If he does, it will serve as a flashing beacon that the Republican Party is in serious trouble— just as the 2015 victory of Kentucky gubernatorial candidate Matt Bevin, a Tea Party outsider, was, in retrospect, a forerunner of Trumpism.

The incumbent Hollingsworth has one advantage over any eventual Democratic opponent—he’s one of the wealthiest members of Congress, with almost $60 millionin assets. Canon says his advantage will come through optics and lived experience. “You have people like Trey Hollingsworth who come to a district as an outsider millionaire with multi-generation wealth and doesn’t understand living paycheck to paycheck, doesn’t understand making the choice between paying for health insurance and paying the rent, or scrounging for change in the couch to buy a Big Mac,” Canon told me. “These are things that I’ve actually experienced, and I think gives me a point of identification with lots of other people. Very few if any candidates at an office this size understand those very real problems because of the prevalence of money in politics… It’s difficult for working-class folks to run for office.”

Now that an orthodontist with a massive and well-documented video game collection has dropped out the race, Canon’s most prominent opponent in the Democratic primary is Liz Watson, an attorney from Bloomington who spent most of her professional life in DC. Canon, by contrast, has always been based in the Ninth District, which stretches from Indianapolis’s conservative, affluent southern suburbs down to Louisville’s middle- and working-class northern suburbs 110 miles away. It includes the hip liberal college town Bloomington, vast swathes of farmland and rural communities, small factory towns, and a city whose opioid crisis is so extreme it led to one of the largest HIV outbreaks in US history.

Before he was a candidate, Canon was a civil rights lawyer on behalf of nearly every liberal cause under the sun. Most notably, he represented a gay couple in Kentucky denied a marriage license, a case that advanced through the court system and merged with others to become the landmark Obergefell v. HodgesSupreme Court case that gave same-sex couples the right to marry.

Canon is currently representing a group of protesters—Kashiya Nwanguma, Molly Shah, and Henry Brousseau—who say they were attacked at a Louisville Trump rally in March 2016 and are suing the president for allegedly inciting the violence by telling his supporters to “get ‘em out of here.” Judges have yet to decide whether the suit, which was brought before the election, can go forward; Canon and the other attorneys are attempting to get Trump’s tax returns during the discovery process and want to depose the president, saying in a motion that “as of this writing, Trump has played golf 20 times since his inauguration. He has the time for a deposition.”

“I go after the cadre of supervillains,” he told the crowd during a recent stump speech.

The suit also targets one of the alleged assaulters, Indiana resident Matthew Heimbach, who supposedly riled up other Trump supporters. Heimbach is the founder of the Traditionalist Worker Party and promoted the “Unite the Right” rally in Charlottesville, Virginia. “It’s about bankrupting the Nazis and smoking out the keyboard warriors,” Canon told me.

Canon’s once sued Kentucky Governor Bevin in an effort to legalize medical marijuana, a suit that was thrown out in September. He’s helped represent prison inmates suing over inhumane conditions, a teacher suing to protest an allegedly unjust suspension, and immigrant families fighting the travel ban. One of Canon’s mediations led to an entire police department’s use of body cams. “I go after the cadre of supervillains,” he told the crowd during a recent stump speech.

He’s done all this while teaching law at his alma mater the University of Louisville, raising two young children with his wife Valerie, acting in community theater, marching with Black Lives Matter. How does he manage it all? “Badly,” Canon told me with a laugh.

Still, not bad for a guy raised by a single mother who dropped out of high school at 17.

Pat, Dan’s mother, worked multiple jobs to support the family after his father left when he was three. While Canon went on to become the first in his family to get a college degree, he took the scenic route there. “I was way into music and not into school. I stopped going, much to the chagrin to my long-suffering mother,” Canon said. “I ran the gamut of people I hung out with, and about half of them felt it wasn’t important to get educated.” He ended up getting his GED shortly after dropping out, even before some of his friends properly graduated, and moved to Los Angeles to pursue music as “a sideman for a lot of different rock and roll and country acts.” Any of note? “Nah, not really,” he said.

It was music that led Canon to law. “There’s something about playing music that puts you in a unique position to learn about people and communities and social problems,” he said. “Like being a bartender, people unload on you as a quasi-therapist and tell you what’s going on in their lives. I learned to care about people who weren’t myself during that process.” Canon wanted to do more, to have a direct effect. He thought about joining the Peace Corp after college, but decided instead on civil rights law, to “go out and do good stuff,” he said. He graduated with honors from the University of Louisville Brandeis School of Law in 2007.

A decade later, he finds himself running for office inspired by his mother. “It was her willingness to step up and do more when the time called for it,” Canon told the crowd at a fundraising speech last fall in the home of Aaron Yarmuth, son of Kentucky Congressman John Yarmuth.

Canon has already grabbed endorsements from multiple Democratic Socialists of America chapters and unions like the Teamsters Local 89. He seems to have a way of inspiring what Democratic operatives might call the “base.” Dustin Collins, his campaign manager, is a 27-year-old Air Force veteran and cancer survivor who married his minister husband thanks to Obergefell and cut his teeth in politics as an organizer for Barack Obama in 2008, helping to turn Indiana blue for the first time since 1964. “[Canon] stirred a passion in me that reminded me why I got involved in politics in the first place,” Collins told me, “a passion that we as a party need to reignite so we don’t continuously come in last in voter turnout.”

If Canon wins, it’ll be a case of being in the right place at the right time—the Democratic Congressional Campaign Committee (DCCC) is targeting the Ninth in 2018. “I think the math is there for a Democrat to win the Ninth District,” said Adam Dickey, the district’s Democratic Party chair. “[Dan’s] message focuses a lot on fighting for individuals. It manifests itself in different issues, but he’s articulating a vision that goes deeper than what previous candidates have had to offer.”

Mary Hellen Ayres is a campaign volunteer and Bloomington resident. “Authenticity counts for a lot, especially outside of Bloomington,” she said. “He’s been living in this district most of his life—he could’ve moved to Louisville or DC, but he didn’t. That means something.” Ayres said she and other activists in the Ninth will support whoever wins the primary, but Dan “has an ability that’s not shared by [Watson] to connect in a real way with people here,” she said. “We know the only Democrat that’s going to flip this district is the one who can get a lot of people to the polls.” Ayres, a midwife of 25 years, has some grassroots experience “working on a campaign to change midwifery laws in Indiana,” but said she never expected to work on a congressional campaign. “But I didn’t expect to find someone as exciting as Dan either,” she added. “He reminds me of a Paul Wellstone,” the legendary Minnesota progressive.

Canon is the sort of candidate leftists dream of—an actual populist, with unimpeachable credentials and even a sense of humor. He’s unwavering in his support of universal universal health care, decriminalizing marijuana as a means to tackle the opioid crisis, raising the minimum wage, criminal justice reform, and other progressive benchmarks. “Dan is unafraid to say what he believes, and the party really ought to be saying [the same thing],” Ayres said.

But his delivery stands out, especially in comparison to some milquetoast technocratic Democrats. “This is an act of incredible cruelty done for no other reason than to appease the lowest common denominator: Trump’s white nationalist base,” Canon said in his statement condemning the Trump’s administration’s to end protected status for 200,000 Salvadorans in early January. That’s the sort of aggressive language Democrats have traditionally been hesitant to embrace, especially in red states like Indiana. “New candidates equals new rhetoric equals new party,” he said.

Canon’s response to the GOP tax bill was a press release marked up in the margins with handwritten notes like the actual tax bill. Canon is also very entertaining on Twitter, and has conducted novel fundraising stunts like #DineWithDan, where donors at the $25 level and above have a chance to eat a meal cooked by Canon at home.

“There’s this dual pressure in this part of the country that you have to be authentic and inauthentic at the same time,” Canon said. “[The Democratic Party wants] you be natural and real and yet dance around your principals.”

There are certainly shades of 2016’s election at play—with Canon playing the passionate, insurgent Bernie Sanders and Liz Watson as the measured insider from DC. Canon himself doesn’t endorse that kind of talk, though. “People are looking for an excuse to re-litigate 2016, but I’m not because I don’t want to create a rift in the party,” he said.

Canon has raised more money than Watson in the last quarter but is still at a disadvantage compared to Hollingworth. Despite that disparity, a one-term incumbent who underperformed Trump in 2016 and voted for the massively unpopular healthcare bill is a textbook target for Democrats.

“We’ve got two good candidates, what a luxury,” said Ayres. “But [in the Ninth] the race is won by being yourself, and Dan being Dan, with his bold record in court, is a pretty winning proposition.”