YouTube rap phenomenon Slim Jesus made his debut to the great state of Kentucky on his inaugural Young & Ignorant tour Friday night at a seedy strip club, or “gentlemen’s club” if you prefer, for a night of entertainment somewhere between slice of life and through the looking glass. It was almost poetic, until you actually got there. Trixie’s Adult Entertainment Complex, located in the mostly working-class white South End of Louisville, has been around for a while and is known for hosting events like Ron Jeremy’s annual Derby party, which last year featured the incomparable Alien Ant Farm, and a garden variety of gnarly machismo-fests presented by the city’s iHeartRadio-affiliated buttrock station. Their Angelfire-hosted website keeps it 100 and offers up a kitschy cool relic of past web ephemera.

The club is about 130 miles south of another generally working-class white community, Hamilton, Ohio, home of Easton Phillips AKA Slim Jesus. Musically, the city also gave us the gifts of Scott Walker and Afghan Whig Greg Dulli. This northern suburb of Cincinnati bears little resemblance to Chiraq, the gritty and violent South Side Chicago scene that birthed Chief Keef and Slim’s not-so-subtle muse, drill music. As CityLab notes, Hamilton was pretty notorious during the Prohibition Era as a safe haven for Chicago gangsters referred to, synchronistically enough, as “Little Chicago.” Slim Jesus made sure to mention this in his infamous interview withVlad TV.

Today, Hamilton’s median household income of $35,365 is lower than the state average, but by no means abject nor regarded as some cauldron of villainy outside a few smartass Cincinnatians. Referenced in the song that launched Slim’s notoriety “Drill Time,” “Frank block” is about a 20-minute drive from IKEA. So be advised that if you Twitter flex, then decide to pick up that POÄNG you’ve had your eye on, Slim might be postin’ up with his fuckin’ gang and let that 40 bang. Unless of course, you rewatch the aforementioned video to discover his Dunkirk – Slim’s got an imagination as big as Caillou, who he totally looks like, and he’s actually not about that life. You can eat those meatballs in peace. 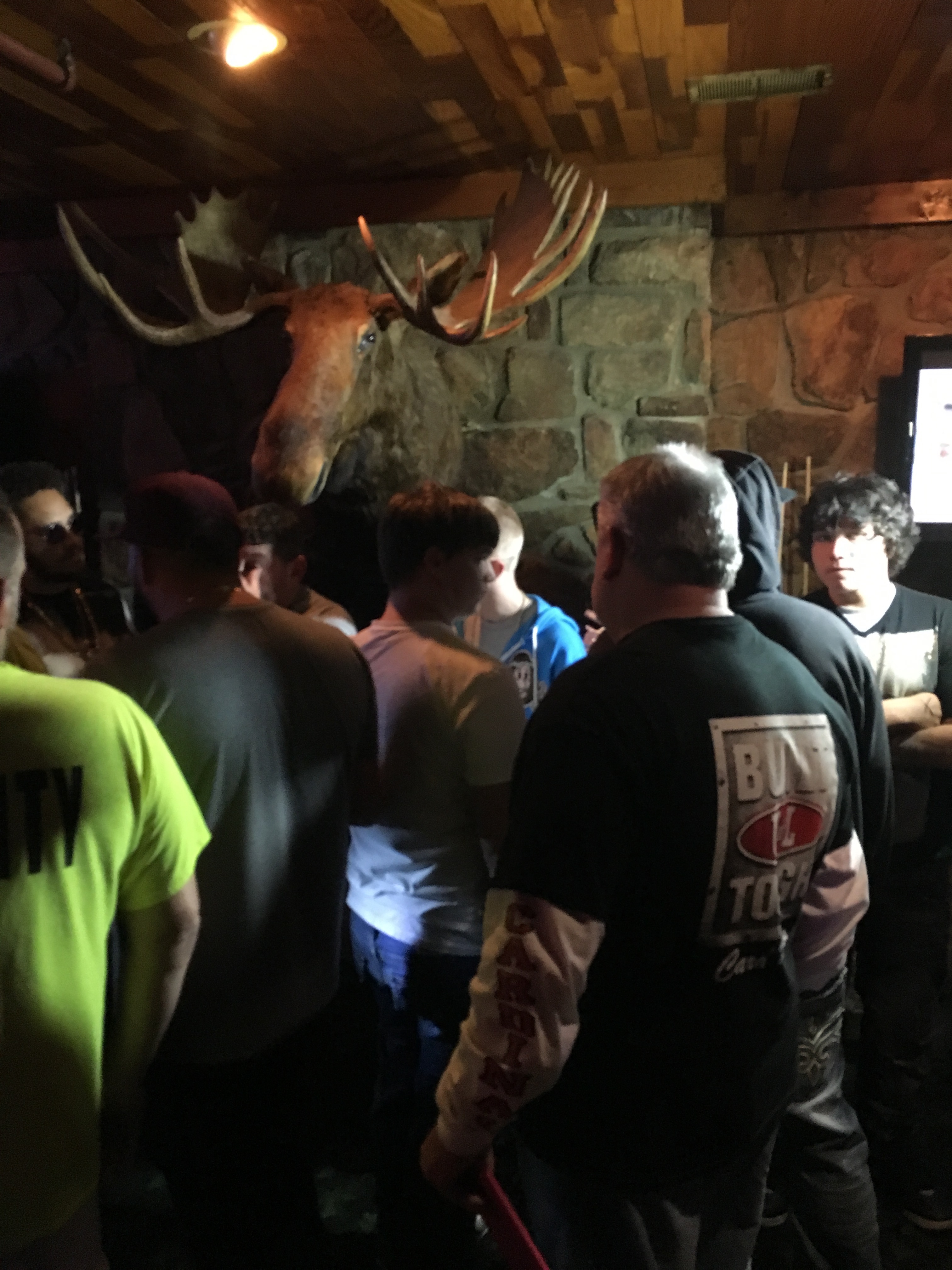 At 10:30 PM, Slim hadn’t yet arrived to The Gold Room, the intimate venue portion of Trixie’s walled off from the showrooms with the dancing, boasting a wide stage presided over by paintings of lionized college basketball coaches Rick Pitino and Coach Cal. A colossal moose head taxidermy towered over the room’s green floral carpet (yuck) with a giant leopard print home plate in the center, apropos of nothing. A crowd of about 25 people have gathered so far to bear witness to Jesus, and everyone is vaping. Everyone.

The DJ, white boy dreads dangling to the beat, announces “looks like homie’s late.” Slim’s first real flex of the night comes in the form of total disregard for punctuality, behavior promoter Terry Harper usually doesn’t suffer. A prominent regional talent buyer who specializes in metal, hardcore, and the occasional hip-hop act, his show-goers took to Facebook to let him know they thought Slim Jesus was trash.

That certainly fits the narrative of the Young & Ignorant Tour thus far. Earlier this month in Ottawa, another Jesus (a local MC by the nom de guerre Black Jesus) stormed the stage, snatched the mic from Slim’s delicate and supple hands, and admonished the audience to “support real hip hop, bitch.” In Atlanta, yet another Jesus and actual Chiraq savage MB Jesus, in town for networking or whatever, confronted him over his alleged fuckery, to which he showcased his supreme talent throwing the smoke bomb and disappearing. Will the real Jesus please stand up?

Considering recent confrontations in Ottawa and Atlanta, “Drill Time” is a spicy meatball for a lot of folks, and that had me wondering if shit was about to get real in Louisville tonight. Looking at the crowd… nah. This group of 18-24s looked like they were en route to a field rave. I wouldn’t put anything past what I can only assume to be one of the opening rappers’ moms, though, the crowd MVP of the night. 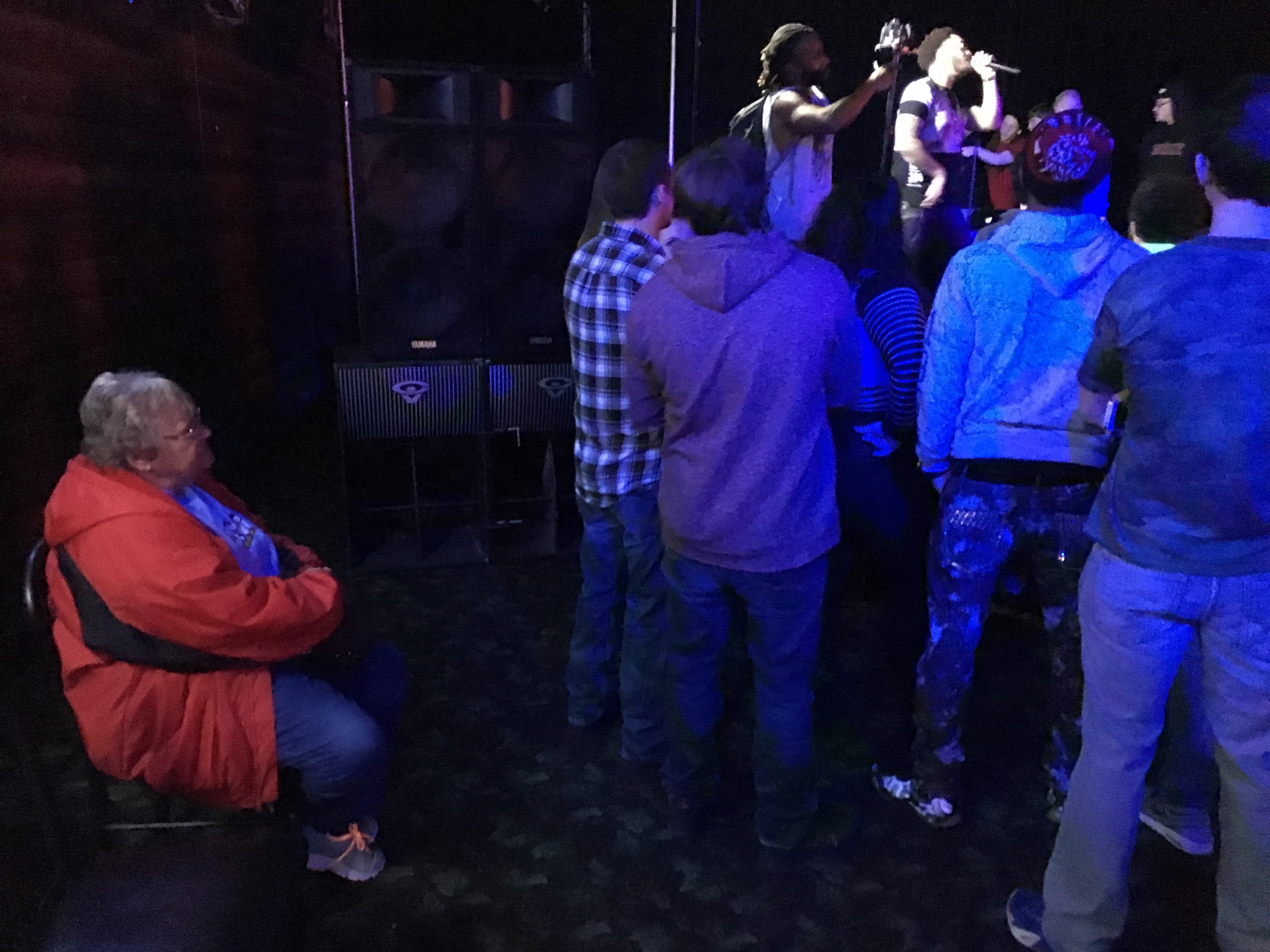 Twenty minutes after the scheduled start time, Slim Jesus and his crew finally rolled up, sneaking through the back door to gather under the taxidermy for a quick photo shoot. The first thing one should notice when beholding Slim Jesus in real life is how incredibly tiny he is. Just a lil’ guy. His purported 1997 birth year is suspect. I demand to see a birth certificate. I am Slim Jesus’ Donald Trump.

After about five minutes of photos by the moose’s head, Slim Jesus, who looks like Opie Taylor after his first growth spurt, hung back stage left totally cheesin’ while a crew member plugged in a single laptop and opened with a few verses sans any soundcheck. His diminutive stature hovering behind, hands in his sky blue hoodie, swaying left and right in his beloved True Religions and feeling fine, what an adorable small child, I thought. I felt like contacting Big Brothers and Big Sisters to see if I could take little Easton out for an afternoon and hit up the Slugger Museum or the zoo or maybe a ballgame.

Then in rather bold fashion, Slim Jesus actually kicked off the concert with his pièce de résistance “Drill Time.” While a somewhat counterintuitive and totally surprising move, more surprising was seeing Trixie’s sending up some special guests from the other side of the partition to dance alongside, particularly since it ain’t legal for 14 year olds to be around strippers. They stuck around for exactly one song before they were escorted back to their shift. I trust someone on the team took some time to help Slim understand the changes that just happened to his body.

Demonstrating some form of OCD throughout the first 15 minutes, Slim’s DJ continuously hit the airhorn between every song, and sometimes during a song, culminating in (by my tally) 32 instances by the time the group got to “She Just Wanna,” the newest banger that appeared just three songs in. “All these thots on my dick cause I got all the clout,” Slim rapped on another new one, “Clout,” a canticle about what one can only assume celebrates the spoils that come with having a high ranking score on social media analytics aggregate Klout (“the standard for influence!”). As of writing this, the author’s current Klout score is 65, meaning the only thing on my dick is my pants. 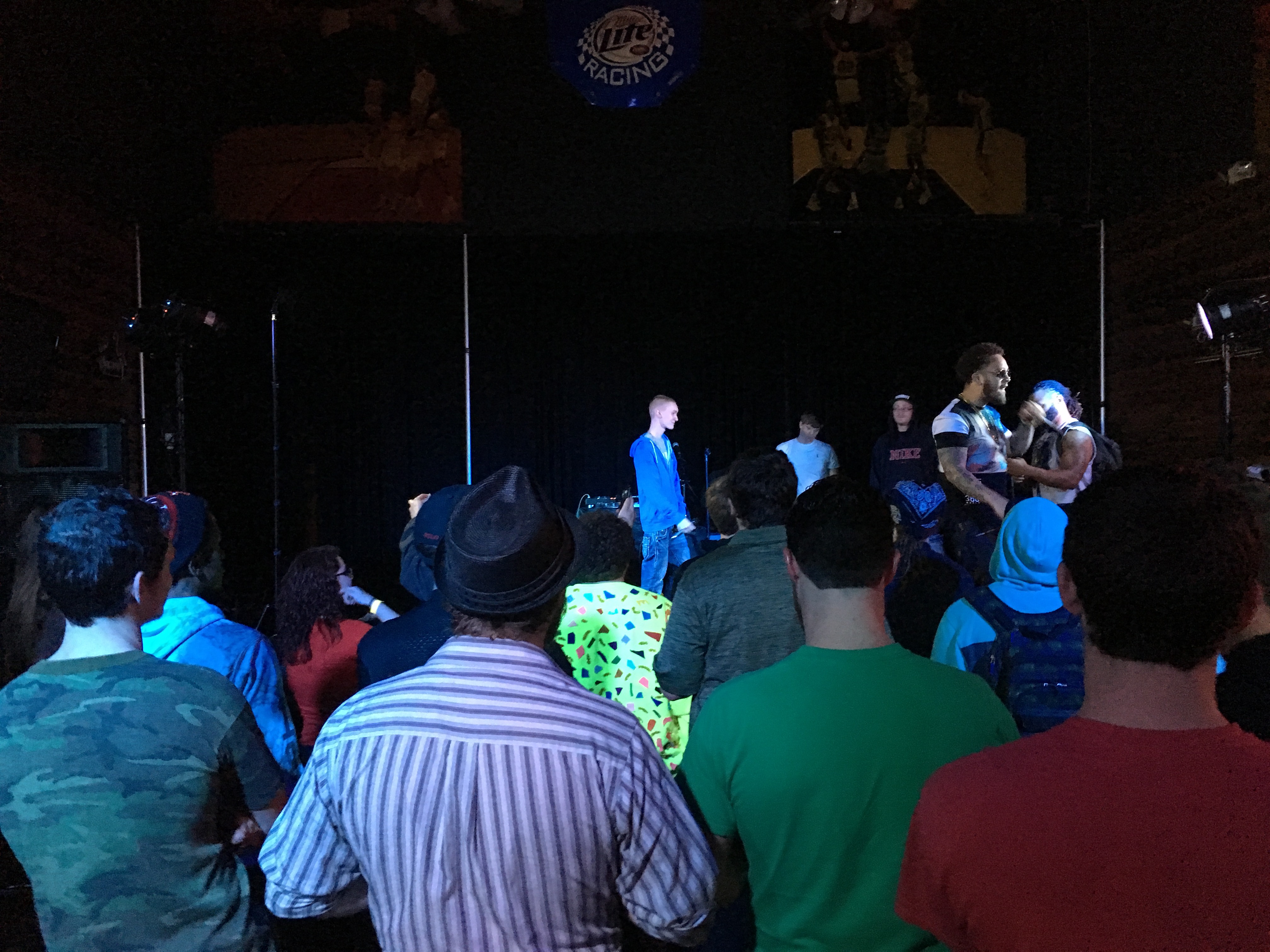 Other than the rave kid in a puffy homemade yellow jacket with jagged shards of glittery paper glued on his back, the crowd, which I can categorically say featured no discernible real Heads, moved only stiffly, some with arms crossed. “Turn up, Kentucky! Turn up!,” the DJ emphatically requested at multiple intervals. Slim Jesus, who looks like Doug Funnie bummed out at the Honker Burger because he said something dumb to Patti Mayonnaise, seemed dismayed and his smile… turned upside down. The wackness was real and palpable, as the crowd, which was modest to begin with, thinned out throughout the set. I felt a little bad for the young man who is absolutely not old enough to buy a lotto ticket, but hey, it’s the first tour. The “Drill Time” video might be an online sensation, but when it comes to the grind, sometimes you just gotta employ the Fugazi method and keep on keepin’ on.

The Game recently remarked to Complex that Slim Jesus might “get his ass smoked,” and seeing him live has me concerned as well. He is very small. And the novelty of watching someone without any sense of self-awareness appropriate a violent lifestyle he doesn’t understand because of how we consume music and culture, the medium becoming the message, feels a bit uncomfortable. It’s more voyeuristic than funny or entertaining. He seems like a nice kid. I hope he starts getting into Drake. 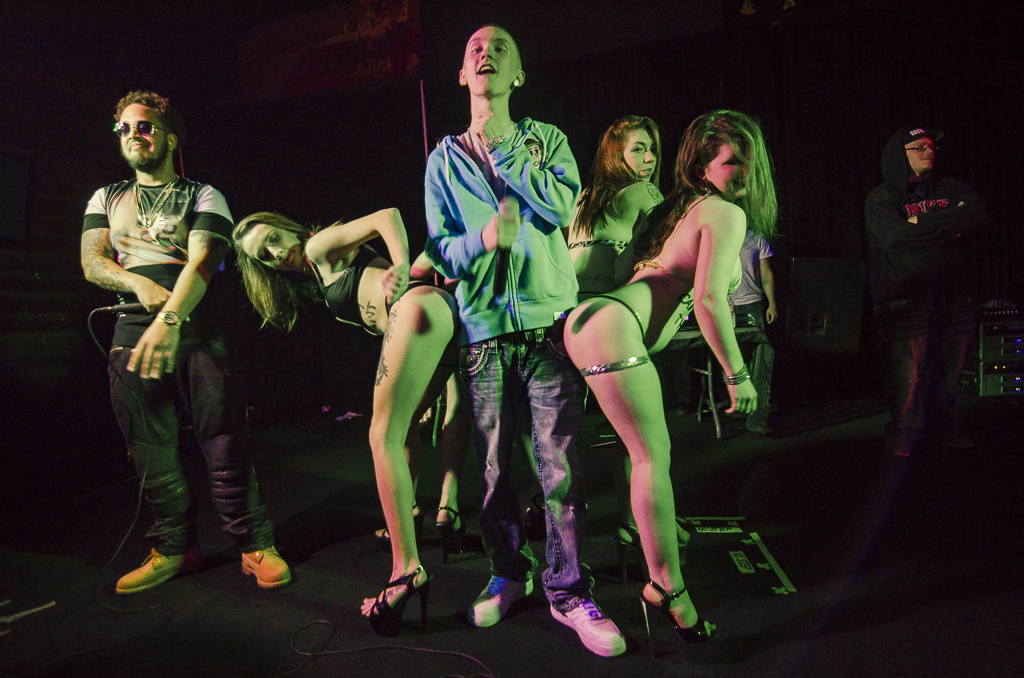